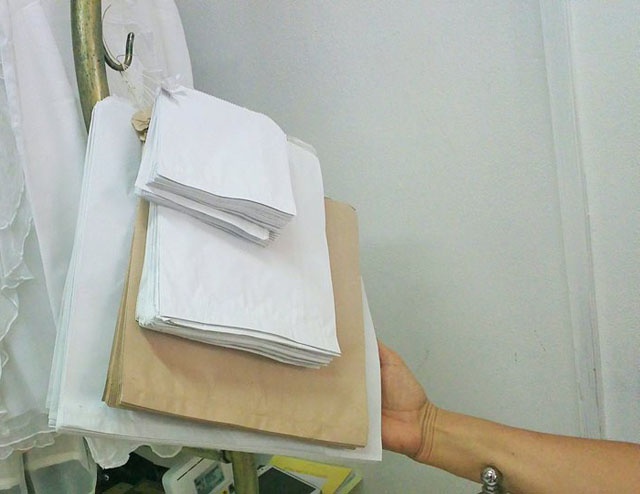 Paper bags -- a possible replacement for plastic bags. The environment ministry is meeting with businesses and retailers as it aims to ensure a smooth transition to meet the January deadline of enforcing a ban on the importation of Styrofoam lunch boxes and plastic bags, plates, cups and cutlery. (Joe Laurence, Seychelles News Agency)

(Seychelles News Agency) - Retailers and business owners in Seychelles this week had the opportunity to voice concerns and ask questions of environment officials ahead of the ban on plastic that begins in January.

The Principal Secretary for Environment Alain Decommarmond said the dialogue was important “to ensure there is a smooth transition so that we can meet the January deadline without any problems.”

During the exchanges with officials from the Environment, Energy and Climate Change Ministry, the businesses were also presented with a list of plastic items that will be exempted once the ban is enforced. This will include plastics used for the disposal of waste, such as bin liners and those designed for agricultural purposes. Packaging used for local snacks and products such as bread and banana chips to preserve their freshness, prevent rancidity and mould growth are also exempted.

Plastic bags used for perishables which have been portioned, pre-packed and sold in frozen conditions such as meat, poultry, fish, seafood, re-packed whole or portioned vegetables and fruits, as well as foods in granular forms such as pulses, sugar, rice and beans also feature on the list.

It was in September that the Seychelles' cabinet of ministers approved a ban on the importation of Styrofoam lunch boxes and plastic bags, plates, cups and cutlery starting in January 2017.

With the enforcement date being only two months away, the Seychelles Trading Company – the largest importer of food products in the island nation -- is among businesses that has already started using bio-degradable plastic carrier bags at its supermarkets and duty free shops.

STC’s purchasing manager Marie-Jona Radegonde told SNA that as soon as the company was informed of the plastic ban beginning in January, contacts were made with its suppliers to request alternatives.

Radegonde said these were sent to the Ministry of Environment, Energy and Climate change for approval.

“It took us only two months to do the necessary and switch to environmentally-friendly carrier bags, and we have also sought samples for woven and paper bags, which we also hope to introduce on the local market soon,” Radegonde told SNA.

Chez Deenu is another company that is in the process of sourcing bio-degradable alternatives from overseas companies to replace the huge amounts of plastic bags and take-away boxes being imported.

M.Senthilkumar said, however, that while Chez Deenu supports the ban from a retailer’s point of view he is anxious to see “how far people can afford to pay for bio-degradable products and the government’s support in terms of exemption on these items.”

He added that because “bio-degradable plastic bags are almost a hundred times more expensive that the non-biodegradable ones, customers should be educated so they understand why they are paying more for the environment.”

For his part, businessman Guynemer Corgat, owner of a several businesses including a butcher’s shop and fast food outlets, wanted assurances that the government would be able to attend to all businesses who would be importing bio-degradable products.

“The ministry concerned wants us to bring our suppliers’ details, the product sample for testing and certification, and I hope that this is done in a timely and efficient manner so as not to disrupt business operations,” Corgat said.

Importers and retailers will have a grace period to exhaust their stock of the banned plastic products.

The Seychelles Retailers’ Association said it had requested a longer grace period instead of the six months -- January to June 2017 -- proposed by the environment department.

The association’s chairperson, Karumbaiyan Cholorajan said: “We represent small shops which have large amounts of plastic bags, styrofoam boxes and other plastic cutlery and they will not be able to exhaust their stocks within the six months given.”

Nannette Laure, Director General for Waste, Enforcement and Permit said all the concerns raised during Thursday’s meeting will be discussed further. She has advised businesses to start informing their clients about the change.

“We met with stakeholders prior to the official approval of the plastic ban and we will continue to meet with specific groups to make sure all their concerns and queries are dealt with prior to implementation of the ban,” she told SNA.

Laure also said that the environment department will be beefing up its education and awareness programme for the benefit of the general public.

The Department of Environment is presently drafting necessary regulations and has indicated that importers who do not respect the ban as of January will be committing an offence punishable by law.

The coming into force of the plastic ban is due to the increase in the amount of plastic bags filling up the Seychelles landfill. According to a provisional study of Seychelles’ landfill, plastic wastes account for 33 percent of all wastes in Seychelles.