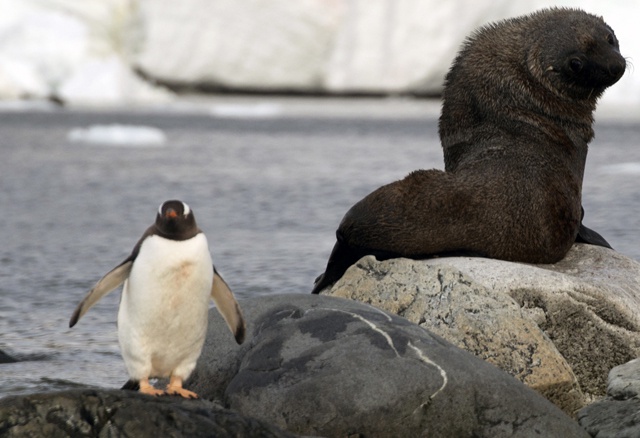 View of a Gentoo penguin and a seal in Cuverville Island, in the western Antarctic peninsula on March 04, 2016. (EITAN ABRAMOVICH/AFP)

(Seychelles News Agency) - The world's largest marine reserve aimed at protecting the pristine wilderness of Antarctica will be created after a "momentous" agreement was finally reached Friday, with Russia dropping its long-held opposition.

The deal, sealed by the Conservation of Antarctic Marine Living Resources (CCAMLR) at an annual meeting in Hobart after years of negotiations, will see a massive US and New Zealand-backed marine protected area established in the Ross Sea.

"The boundaries of the MPA, however, remain unchanged."

The Ross Sea is one of the last intact marine ecosystems in the world, home to penguins, seals, Antarctic toothfish, whales and huge numbers of krill, a staple food for many species.

It is considered critical for scientists to study how marine ecosystems function and to understand the impacts of climate change on the ocean.

Moscow was the last government opposing the move, largely due to concerns over fishing rights, after China offered its support last year.

"We had a lot of talks with them. Secretary (John) Kerry reached out to Russian President (Vladimir) Putin and (Foreign Minister Sergei) Lavrov and I think that helped a great deal to convince Russia to come on board," Evan Bloom, head of the US delegation at the meeting, told AFP.

"This decision is very important not just for the Antarctic but for efforts to promote world marine conservation."

Moscow has signalled more commitment to conservation in recent times, designating 2017 as the Year of Ecology. It moved in August to significantly increase the size of a protected zone around Franz Josef Land in the Arctic.

While the Ross Sea plan got the go-ahead, time ran out at the meeting to reach agreement on a second proposed protected area -- the Australia and France-led East Antarctica sanctuary covering another one million square kilometre zone.

Both reserve proposals have been on the table since 2012 with CCAMLR -- a treaty tasked with overseeing conservation and sustainable exploitation of the Antarctic Ocean, also known as the Southern Ocean.

Consensus is needed from all 24 member countries and the European Union.

A third German-proposed plan is also in the works to protect the Weddell Sea, which extends from the southeast of South America over an area of some 2.8 million square kilometres.

"For the first time, countries have put aside their differences to protect a large area of the Southern Ocean and international waters," said Mike Walker, project director of the Antarctic Ocean Alliance, calling the outcome "momentous".

"Although there was not a decision on the proposed protection of the Weddell Sea and the East Antarctic this year, we are confident that these areas will be protected in the coming years, adding to the system of marine protected areas in the Southern Ocean."

The Ross Sea is named after British explorer Sir James Ross and his great, great, great granddaughter Phillipa Ross said the family was thrilled it was safeguarded.

"The Ross family are euphoric that our family legacy has been honoured in the 175th anniversary year since James first discovered the Ross Sea, thanks to the individuals and organisations who have poured their hearts and souls into campaigning for its protection," she said.

It culminates years of pressure by conservationists, including a campaign by the global civic movement Avaaz which was kickstarted by Hollywood superstar Leonardo DiCaprio.