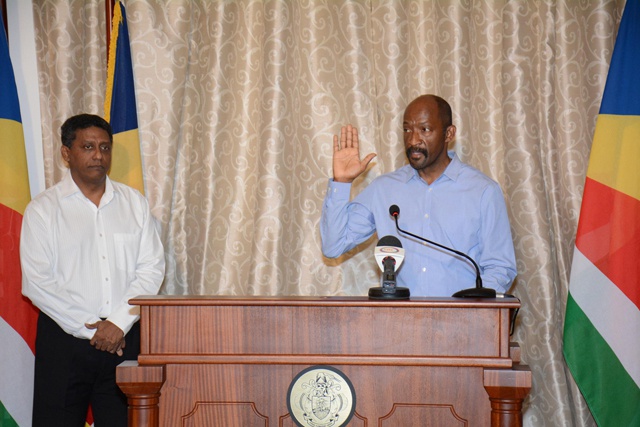 Vincent Meriton took the Oath of Allegiance and Vice Presidential Oath in a ceremony held at State House in the capital, Victoria on Friday. (Joena Bonenlame, Seychelles News Agency)

(Seychelles News Agency) - Vincent Meriton was sworn in to office on Friday, becoming Seychelles’ new Vice President a day after his nomination by President Danny Faure was approved by the National Assembly.

Meriton replaces Faure, who held the post of Vice President before he moved up to the presidency after former President James Michel resigned in September.

Meriton, 55, took the Oath of Allegiance and Vice Presidential Oath in a ceremony held at State House in the capital, Victoria. President Faure was in attendance, as were government, judiciary and national assembly officials.

Meriton told journalists that he welcomes the God-given opportunity to serve as the island nation’s Vice President.

He said that “working for the people, remaining connected to the people are things that have been emphasized by the president, and for me these are new challenges which I will have to attain personally and for the benefit of the Seychellois people.”

Meriton holds a Master of Arts (MA) in Sociology from the Moscow State University.

His ministerial career started in 2004, and he has occupied various ministerial portfolios including social affairs, employment, health, culture, community development, youth and sports. Until his appointment as Vice President, Meriton was the Designated Minister, a post held since 2010, along with the responsibility of Minister for Community Development, Social Affairs and Sports.

Meriton also served as a member of parliament between 1998 and 2002.

The new Vice President is the father of three children – two daughters and a son.

Before taking his oath, the new Vice President along with five other ministerial nominees had to go through a historic process this week, whereby they had to give a summary on why they were best suited for the posts and answered questions from the National Assembly.

Meriton has described the nomination process as symbolic of the work that needs to be done to accomplish the task at hand, to ensure that the Seychellois people can grow, work and contribute towards the country’s development.

He has emphasized on the need for a collaborative effort between the government, private sector, civil society to ensure that there’s team work and at the same time ensure that it’s not all talk but action as well.

“I believe that there’s work to be done. It’s another chapter and we need to look at things on the basis that the political landscape has changed and that our approach needs to be adjusted without losing focus on the ultimate objective -- to make Seychelles more prosperous and ensure that the people is part of this process.”

With seven portfolios under his responsibility Meriton has emphasized on the need a good system of administering the different departments to ensure the maximum use of the available expertise. Meriton said he would begin meeting with government leaders next week to begin concrete action.