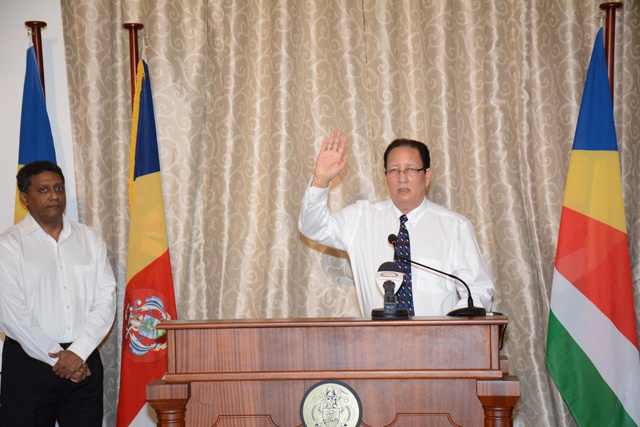 Dr Peter Larose was the only ministerial nominee out of four names proposed who received the unanimous backing of the assembly on Thursday. (Joena Bonnelame, Seychelles News Agency)

(Seychelles News Agency) - Dr. Peter Larose, was sworn in as a government minister on Friday, following the National Assembly’s approval of his nomination by President Danny Faure. Larose is ending his mandate as the Executive Director of one of the World Bank’s Africa Group overseeing 22 countries.

Larose was the only ministerial nominee out of four names proposed who received the unanimous backing of the assembly on Thursday, following two days of sessions with the parliamentarians. He has not yet been assigned a ministry. The country’s new Vice President Vincent Meriton and new Designated Minister Macsuzy Mondon were sworn in at the same ceremony.

Larose took the Oath of Allegiance, Oath of Office and Oath of Secrecy in a ceremony held at State House in the capital, Victoria. President Faure was in attendance, as were government, judiciary and national assembly officials.

He told journalists that he found the process of interview and dialogue in the assembly to be absolutely normal and that he was used to this, due to his experience working at the World Bank.

“It was not difficult, I am also disciplined, I do not come to tell stories, I go straight to the point and that’s it, as I am a straight talker,” said Larose.

Larose, 62, has experience in the fields of finance, accountancy, economics and banking. He holds a Master of Administration (MBA) in International Banking & Finance from the University of Birmingham, and a doctorate degree (PhD) in UK Commercial Banking from the same university.

He started his career in 1975, moving up the ladder to becoming the advisor to the Ministry of Finance between 2000 and 2001 and General Manager of the Central Bank of Seychelles between 2001 to 2005.

Larose is married and a father of three sons. He has served in several posts at the World Bank since 2008, and will be ending his mandate as the Executive Director of the Africa Group 1 Constituency at the World Bank Group on Monday.

He said that he has chosen to contribute his share of expertise and experience to Seychelles, in spite of having been offered to work for other countries and international institutions.

Larose described himself as someone who is confident and believes that he will be able to discharge his new responsibilities with the support of the president, other colleague ministers and the Seychellois nation.

“I am a people’s person, but as far as the job is concerned I’m a serious person to achieve results. I do not know which portfolio will be assigned to…whichever portfolio is assigned to me, what is important is that I am ready to work for my country.”

The previous cabinet of the former president James Michel had 12 ministers including the newly sworn in Vice President Vincent Meriton and Designated Minister Macsuzy Mondon.

In his address to the National Assembly two days after he took office, the new President Danny Faure his government structure also comprising of 12 ministries.

The names of which minister is being assigned to each ministries is yet to be announced yet.

Three other individuals – Dick Esparon, Marie-Louise Potter and Patrick Herminie -- were being proposed as ministers but their nomination was not approved by the assembly.

The Attorney General Ronny Govinden said on Thursday that President Faure has two choices -- either re-assign the ministerial portfolios among the existing ministers and the newly approved minister or submit a new list of nominees to the assembly for approval.

The president announced in a press statement issued on Thursday that he will be addressing the members of the new cabinet at a special meeting on Saturday October 29.