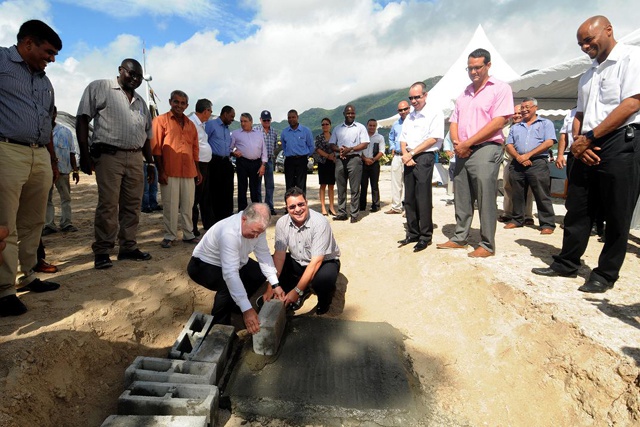 (Seychelles News Agency) - Work to build a new tuna quay to reduce unloading time of purse seiners and relieve congestion in the Seychelles Port of Victoria is starting soon following the groundbreaking ceremony for the project this morning.

The foundation stone for the project, which will cost between $ 15 million and $ 20 million, was laid by the Seychelles Minister for Finance, Trade and Investment Pierre Laporte and Jacques de Chateauvieux, Chairman and Chief Executive of Jaccar Holdings.

Reunion-born de Chateauvieux is ranked 64th richest in France with an estimated wealth of 800 million euros according to Challenges magazine.

This public and private sector partnership involving the Seychelles Government and Luxembourg-based Jaccar Holdings will see the construction of a 425 metre commercial fishing quay at Ile du Port, a man-made island next to the Port Victoria, the main port of the Seychelles capital.

The new facility will provide 5 berthing spots, open to all ship owners.

A Victoria-based joint venture, Ile du Port Handling Services (IPHS) has been incorporated to run the project on a Build-Operate-Transfer (BOT) basis. This means that the new company will construct and manage the quay, and transfer it to Government after recovery of the construction cost.

The agreement for the joint venture was signed in March this year.

After the first board meeting this afternoon to validate the project, work will start by local construction company Vijay Construction and is scheduled for completion by November 2015.

Noting that Port Victoria is the main Indian Ocean Centre for unloading and transshipment of tuna, Seychelles’ Natural Resources Minister Peter Sinon, said “the new onshore infrastructure will boost the seafood hub and make the ‘Blue Economy Concept’ a reality.”

Sinon said the quay will be followed by the addition of new cold storage and fish processing plants.

An average of 200,000 metric tonnes of fish are landed and transhipped in Port Victoria every year and according to statistics from the Seychelles Fishing Authority, fisheries accounts for an income of $370 million yearly into the Seychelles economy.

The archipelago’s Home Affairs and Transport Minister Joel Morgan said the new quay will relieve congestion and make it more flexible for vessels to operate in Port Victoria.

“The new facility will reduce average time at quay for each vessel to a maximum of 4 days,” said Morgan adding that this is crucial at a time of increasing competition in the region.

Morgan also said that the facility will mean a new national asset for Seychelles.

There will be efficient unloading of catches with dedicated handling equipment to unload (or load a minimum of 300 tonnes per day per vessel, while preserving the temperature and quality of tuna.

The quay is expected to cost up to $20 million and will be financed on an 80%-20% debt-equity basis.

A JACCAR representative told SNA that 20 percent of the funding for the project will be secured by the Societe Seycheloise d'Investissement, in conjunction with Jaccar and local private businessmen.

The remaining 80 % will be loaned by various banks, notably the African Development Bank (AfDB) and the European Investment Bank (EIB).

JACCAR Holdings includes a portfolio of businesses concentrated on marine and offshore activities, shipbuilding and shop ownership, property development and fishing in Reunion island, an overseas department of France in the Indian Ocean, as well as Vietnam and China. The holding company is the main shareholder of Bourbon as well as Greenship Bulk, Greenship Gas and SAPMER Holdings, as well as a shareholder of the Chinese shipyard Sinopacific Shipbuilding.

The Reunion-based tuna fishing company SAPMER will also build a fish processing and storage facility, also on Ile du Port, which will be developed at the same time as the fishing quay. It currently operates from Reunion island with a fleet of 12 vessels, long liners and tuna purse seiners, making it one of the largest fishing companies of the Indian Ocean region.

According to the Seychelles Fishing Authority, SAPMER has 3 purse seiners licensed to fish in the Seychelles exclusive economic zone, and has said it plans to apply for more licenses in the future.