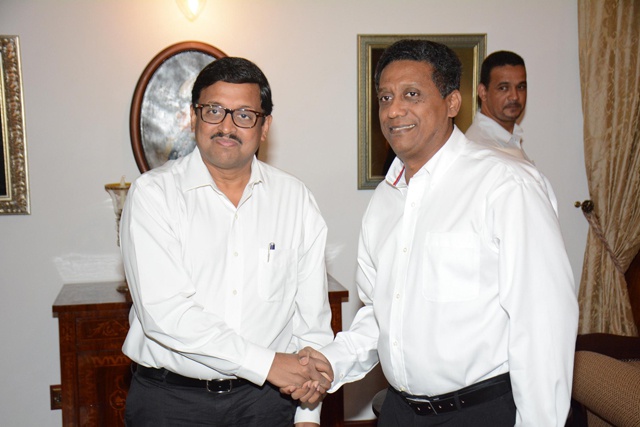 Sanjay Panda was accredited as the resident Indian High Commissioner to Seychelles in August 2014 -- he is leaving to take on new responsibilities in India. (Joena Bonnelame, Seychelles News Agency)

Sanjay Panda paid a courtesy call on President Danny Faure at State House now that he is ending of his diplomatic mission in Seychelles.

“In India we are convinced that size is no barrier to the scale of achievement and that is what we have seen in Seychelles. As natural partners, I can tell you that the sky is the limit,” Panda told reporters after the meeting.

Speaking about the events that marked his mandate, Panda highlighted the visit of the Indian Prime Minister Narendra Modi to Seychelles in March 2015 and that of former President James Michel to India in August the same year, as the events that “provided the momentum to the bilateral relationship” between the two countries.

Sanjay Panda was accredited as the resident Indian High Commissioner to Seychelles in August 2014 and has nine months remaining on his three-year mandate.

He said that is departure is premature as “my presence is required in [New] Delhi as I am taking on other responsibilities.”

During his farewell call on President Faure, the two talked about the vision of the new president for the country and how the India-Seychelles relationship can be further developed.

President Faure "identified four core areas that he would like to work on. One area that he is interested to focus on is agriculture,” Panda said.

Panda was the 15th Indian High Commissioner accredited to Seychelles. He is leaving the island nation on November 8.

“My successor will be [coming] very soon, definitely before the end of the year,” said Panda.