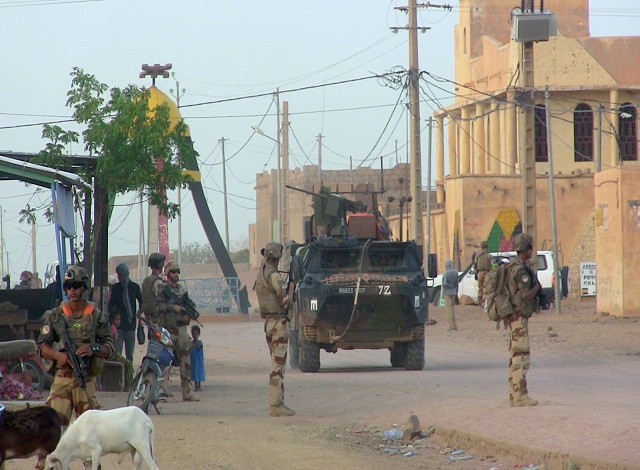 French soldiers of the Barkhane counter terrorism operation patrol in a street of Kidal, on October 3, 2016. (STRINGER / AFP)

(AFP) - A peacekeeper from Togo and two Malian civilians were killed Sunday in an attack on a military convoy in Mali, rounding off a bloody week for foreign forces stationed there, a UN statement said.

More than 11,000 UN police and military are currently serving in Mali, attempting to guarantee security in lawless swathes of the vast Sahel nation.

Seven other peacekeepers, also from Togo, were wounded in the attack in the central Mopti region, according to the statement by the UN mission, known by the acronym MINUSMA.

After a mine or improvised explosive device was detonated, attackers opened fire on the convoy, the UN said, without identifying the assailants.

A MINUSMA spokesman said Malian police would investigate the death of the two civilians following the convoy.

The attack came the day after a soldier serving with France's "Barkhane" counter-terror force was killed in a similar incident.

He died of his injuries following a mine blast near the northern town of Kidal in an attack claimed by the Islamist group Ansar Dine, which has ties to Al-Qaeda.

"I stress regularly to President Ibrahim Boubacar Keita that he must take the necessary initiatives to ensure the integration of the people of the north into the Malian community," he told French media.

In Bamako, however, a Malian minister who did not wish to be named, hit back saying Mali did not need "national unity lessons" from Le Drian.

"We have been working on national unity for a long time. Unity should go hand in hand with the fight against terrorism, insecurity," the minister said.

"The situation in Kidal is not because of the Malian government."

However, the Malian president convened an emergency meeting and instructed security forces to take more mobile positions in several parts of the country, especially the north, also calling for more patrols.

"The state will provide the means needed to fight against terrorism," one participant at the meeting said.

Also on Sunday, Ansar Dine claimed the ransacking of an army base in the north during which they stole weapons and vehicles as troops fled their positions.

The claim of responsibility was issued by Mauritanian news agency al-Akhbar, which regularly carries statements from jihadist groups operating in the Sahel.

The jihadists said they had killed "several" Malian soldiers but this was denied by independent sources and military officials contacted by AFP.

More than 30 MINUSMA troops have been killed this year, more than in any other UN peacekeeping mission.

It has been plagued by logistical failings and the UN has admitted instances of torture and sexual abuse by staff, as well as one instance of causing the death of a detainee.

The Mopti attack took place as Canadian Defence Minister Harjit Sajjan held talks with top officials in Bamako ahead of the deployment of 600 Canadian peacekeepers to Africa, and possibly to Mali.

Sajjan said Canada wanted to "take our time" before deciding which nation to support, but added Canada was "not averse to risk".

The United Nations has expressed interest in having Canadian tactical helicopters deployed in the region once Dutch aircraft leave in January.

MINUSMA deployed in Mali in 2013, following a French counter-terrorism force that landed in January to drive jihadists from key northern cities they had overrun.

Northern Mali had fallen into the hands of jihadists linked to Al-Qaeda in early 2012 -- briefly backed by Tuareg-led rebels -- throwing the country into chaos.

Although the jihadists were routed, large swathes of Mali remain outside the control of domestic and foreign troops.