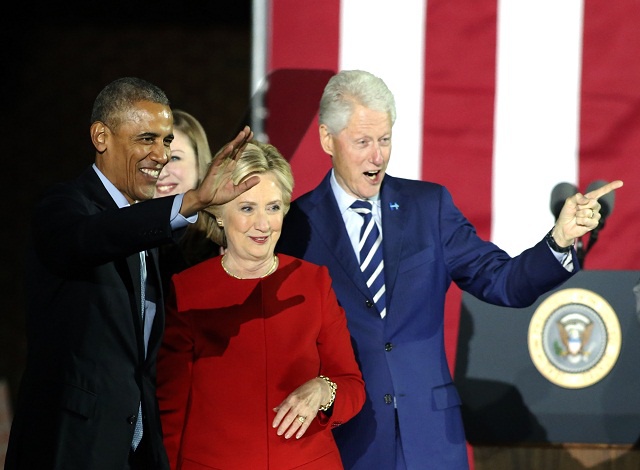 US Democratic presidential nominee Hillary Clinton (C), US President Barack Obama (L), and former US president Bill Clinton (R) wave to the crowd after a rally on Independence Mall in Philadelphia, Pennsylvania, November 07, 2016 About 40,000 people flooded Independence Mall in Philadelphia for Hillary Clinton's rally with her husband Bill, President Barack Obama and his wife Michelle at her side, a campaign aide said. The attendance set a new record for Clinton, with the previous high point a rally in Ohio that drew 18,500 people, a campaign aide told reporters traveling with the candidate. (KENA BETANCUR / AFP)

(AFP) - The latest polls and projections the day before Americans vote in one of the most divisive elections in US history show the race remains very close, but with Hillary Clinton slightly ahead.

The Democratic presidential candidate's lead over her Republican rival Donald Trump widened to 3.2 percentage points in an average of polls by the website RealClearPolitics.

That figure comes a day after the FBI said it had found no criminal wrongdoing in Clinton's use of a private email server following a last-minute review that had put her campaign under a cloud, enabling Trump to recover ground after a series of devastating scandals.

The latest national poll, released by CBS on Monday, gave Clinton a four percentage point advantage with 45 percent of support against Trump's 41 percent in a four-way race including Libertarian candidate Gary Johnson and Green Party nominee Jill Stein, who had five percent and two percent, respectively.

Several US media projected the likely distribution of electoral votes on Monday, also predicting a victory for the former first lady.

NBC predicted she would win 274 electoral votes compared to 170 for Trump, saying polls in states holding the remaining 94 electoral votes were too close to call. However, that would be enough for Clinton to get past the finish line of 270 electoral votes needed to win a majority.

Votes in the election are awarded indirectly, with members of the electoral college formally casting ballots according to the popular vote in each of the 50 states and the District of Columbia.

The influential news website FiveThirtyEight.com on Monday gave Clinton a 68.3 percent chance of winning compared to 31.6 percent for Trump, based on the polls and predictions.

A Quinnipiac University survey released Monday shows an extremely tight race in the crucial swing states of Florida and North Carolina. But it also gave Clinton the lead with 46 percent in Florida compared to 45 percent for Trump, and 47 percent in North Carolina against Trump's 45 percent.

General » Be a reporter: Write and send your article » Subscribe for news alert
Tags: US, Vote, poll, election