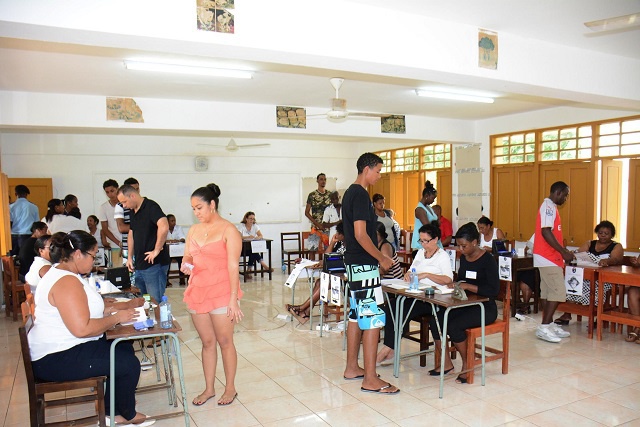 (Seychelles News Agency) - A voter census is expected to be conducted in Seychelles in the first quarter of 2017 to produce an updated voter register, officials of the Electoral Commission said on Tuesday.

“The census will give us specific details about a person’s name, date of birth and national identity number,” the chairperson of the commission, Hendrick Gappy, told journalists.

Details of a person’s address will also be compulsory information collected, as it will establish where exactly he or she is residing in a particular district, Gappy said.

Gappy noted that the conduct of such an exercise was proposed during discussions on electoral reforms which started late 2011 through 2013, adding that this hadn't yet been implemented due to time constraints.

“It would have taken us roughly a year to implement the proposal and since we had an upcoming election, it would have been impossible to run the two exercises at the same time,” he explained.

In a press statement issued on Monday, the Electoral Commission listed a voter census as one of the main component of an action plan it has outlined to improve the efficiency, transparency and credibility of the electoral process. This follows its review of several reports submitted by stakeholders including observer missions following recent elections held in Seychelles.

The need to conduct a voter census was raised by political parties and local and international observers following December 2015 presidential elections and recent legislative polls held in the island nation in September.

According to the Electoral Commission the voter census is expected to start in April next year, which will see door-to-door to collection of information to update the voters’ register. Gappy said a mapping exercise is already being done by the National Bureau of Statistics to prepare for the exercise.

The Electoral Commission is expected to submit the proposed census, including the required budget -- which is part of recommendations set out in the commission’s post-election reports -- to the National Assembly shortly.

“All political parties have expressed the importance to have a voter census and we are saying that it is important that the assembly takes a stance and acknowledge its importance, so that when we submit our budget it will be approved,” said Gappy, adding that this is necessary to begin preparatory work in January.

The introduction of fingerprint identification for registered voters is another action that the electoral body seeks to implement. Gappy said the commission has been negotiating with the identification card unit within the Department of Internal Affairs to consider the implementation of such an identification system.

He said this has been identified as a priority to ensure credible elections and was happy that it has been taken seriously by the government.

Gappy said a review of the Electoral Commission to create the post of a chief executive officer that will be in charge of the day-to-day running of the secretariat and report to the electoral body is also being considered, adding that such is in line with best practices set out by the Southern African Development Community (SADC) “to promote more credibility, transparency and accountability.”

Currently the Electoral Commission is made up of five members including its chairperson.

This need to review the structure of the Electoral Commission, which was also highlighted in observer mission reports following September parliamentary polls, is another reform proposed during the electoral reform process which ended in 2013, but which is yet to be implemented.

The Electoral Commission has said that it recognizes that the promotion of democracy during elections is a continuous process and is fully engaged to respond to recent experiences and views of all stakeholders concerned in delivering elections which are free, credible and transparent.

Presidential and parliamentary election in Seychelles are held every five years.