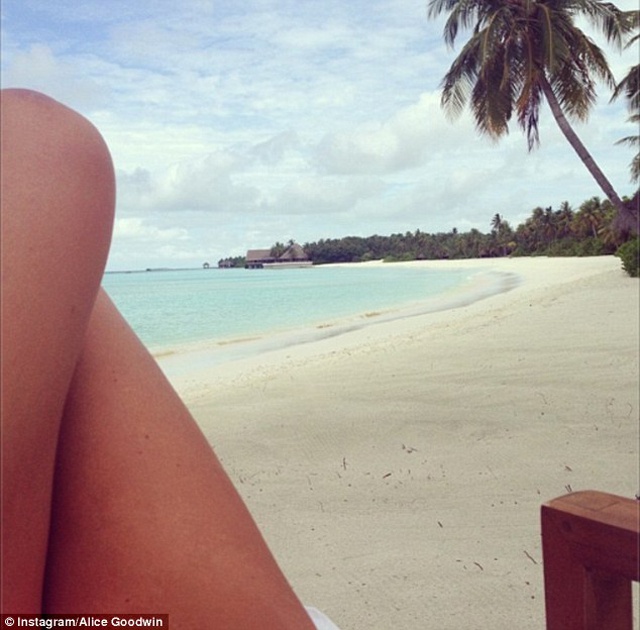 Fun in the sun: Goodwin posted a photo of her legs while lying on the beach with the caption 'Heaven' (Instagram/Alice Goodwin)

(Seychelles News Agency) - After tying the knot with his glamour model girlfriend Alice Goodwin, former Stoke City football player Jermaine Pennant has whisked his new wife off for a romantic honeymoon in the Seychelles.

The couple posted Instagram pictures of their exotic getaway at an unknown luxury resort in the archipelago of over 100 islands in the Indian Ocean, famed for its reputation as an ultimate getaway destination for newly-weds.

Nottingham-born Pennant, who has played for big league teams such as Liverpool, Arsenal and Birmingham City, was this year released from his contract at Stoke by its new manager, Mark Hughes, and speculation is rife that Pennant is looking to move abroad to join the Al Nassr football club in Dubai after he was spotted at the club recently with his agent.

According to UK news website of the Daily Mail newspaper, the 31-year-old footballer said he was not about to retire any time soon.

“I'm determined to play the best football of my career over the next few years,” he said. “I feel settled, happy and ready to take on a new challenge on the pitch. Hopefully my situation will be sorted when I get back from our honeymoon.”

Pennant married 28-year-old Goodwin, whom he had been dating for the past two years, at the plush Mere Golf Resort & Spa near Knutsford in front of family and friends last weekend.

After years of poor discipline, including late-coming for training and matches, assaults on other footballers, and drink-driving convictions, all the while with a bevy of models, actresses and television presenters in tow, it seems as though Pennant may finally be ready to take his career and personal life seriously.

“Alice is the woman of my dreams and it was emotional to finally tie the knot with her,” he said. “I feel settled and happy.”