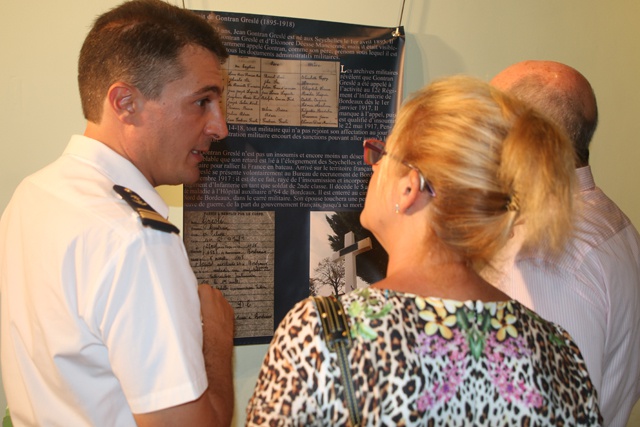 (Seychelles News Agency) - Seychellois soldiers who fought for France during World War I are being honoured in an exhibition which opened at Alliance Française on Tuesday.

Proal told reporters that the research started with the soldiers’ military file, and then other archives in France and Seychelles were consulted to come up with accurate information on the soldiers.

These include birth date, baptism and physical description which was detailed since photography was not popularly used back then, plus details about their death and where they are buried.

The exhibition coincides with Armistice Day commemorated annually on November 11, to mark the ceasefire between the Allies and Germany on the "eleventh hour of the eleventh day of the eleventh month" of 1918, which brought an end to the First World War.

The First World War took place between 1914 and 1918. It pitted Germany, Austria-Hungary and the Ottoman Empire also known as the Turkish Empire against Great Britain, France, Russia, Italy and Japan, joined by the United Stated in 1917.

According to Proal, Lanier, who was born in 1893, enrolled in the French army in 1915 and arrived in France in March.

Thibault enrolled in the French army and was based in Alger, until the end of the First World War. Proal said, “He remained in the army and  died in Alger in 1952 at 63 years old.”

Vidot died and was buried in Marseille on the south coast of France and as for Gontran Gresle, born in Seychelles in 1895, joined the French army in 1915 and died of an illness in Bordeaux, south-west of France in April 1918, the place where he was also buried.

Gresle’s name also features on a plaque at the Holy Saviour’s Church at Anse Royale.

The exhibition gives details about the soldier's military life and tried to establish their descendants.

Proal said they have been able to identify the descendants of only Lanier.

At the opening of the exhibition on Tuesday, Lanier’s relative, Michelle St Ange, received the French Croix de Guerre, with a bronze medal, and an official commendation for Lanier’s bravery and outstanding service from Lionel Majesté-Larrouy, the French ambassador to Seychelles.

Speaking to the press, St Ange said her grandmother was born Lanier and growing up she was told the story of her great-uncle, France Lanier, who fought in the First World War.

“There was a story that his parents told him to go to France to find a French lady and get married. And he went to France to do just that, and when he got there he joined the army,” said St Ange.

She said receiving the medal and commendation was a huge honour for the family and also for Seychelles, a group of 115 islands in the eastern Indian Ocean, as it's not often one sees a person receive such recognition.

Lionel Majesté-Larrouy, the French ambassador to Seychelles, said, “France would forever be grateful to these young and courageous men who were volunteers.”

“We will never know what motivated them, but it’s certain there’s a special link with France that pushed them to wear their blue uniform, the uniform used by French soldiers during the first world war,” said Majesté-Larrouy.

The exhibition is open until November 30 at the Alliance Française in the Seychelles’ capital, Victoria.