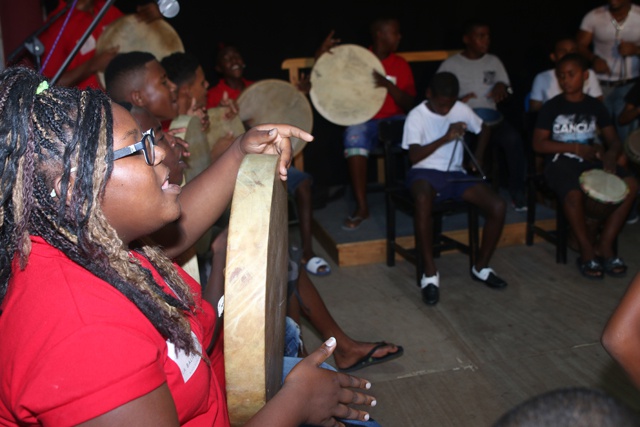 The exchange visit to Seychelles for 'Mizik dan Lapo' from Mauritian is a prize they won for coming out first in a sega competition held in 2015. (Joe Laurence, Seychelles News Agency)

(Seychelles News Agency) - A one-week exchange between young musicians from two sister Indian Ocean islands has helped to deepen their knowledge and appreciation of each other’s culture.

This was showcased on Friday as members of a Mauritian music school -- ‘Mizik Dan Lapo’ -- and the Seychelles Junior Percussionist group came together for a performance.

The sounds of the moutya and sega beats echoed at Theatre des Palmes, on the outskirts of the capital, Victoria, as the youngsters demonstrated their skills playing the moutya drums, djembe and other instruments.

Aside of being able to able to communicate with their southerly Mauritian neighbours in their slightly different Creole, similar traditional music styles especially the sega is also shared between the two islands.

The show was in fact the culmination of one week of musical exchanges facilitated by Seychelles Music Association (SEYMAS). Several Seychellois musicians, namely Norville Ernesta, Hubert Poiret, Elvis Renaud and Elvis Mellie, were given the opportunity to pass on their skills and knowledge to the children through music workshops.

Jasmine Toulouse – leader of 'Mizik Dan Lapo’ from Mauritius -- said the exchange was a success and has allowed ten young members of her group to learn about the Seychelles’ culture and language.

“They were happy to learn about the music, the people, language and culture, which although close to ours are somehow different. It was an enriching experience,” Toulouse told SNA.

“I never thought I would one day come to Seychelles and meet other young musicians and learn so many things,” said Melodie, who is a dancer and singer in the group.

Drummer Loic August said he was looking forward to a second trip to Seychelles next year.

“I’ve made new friends and I was happy to learn the moutya from the Seychellois musicians and I taught them how to play our sega as well,” Loic said to SNA.

For the Mauritian group, the Seychelles trip is a prize they won after coming out first in a sega competition held in Mauritius’ during their own Creole Festival held in 2015.

‘Mizik Dan Lapo’ which regroups less fortunate children aged between 7 and 16, originates from Riviere Noire – a district in the western region of Mauritius. The group set up in 2014 offers free music lessons twice weekly where the youngsters learn to play traditional Mauritian musical instruments such as the “ravanne,’ ‘maravanne,’ ‘triangle’ and conga.

According to Toulouse the drive to compete in the ‘Sega Tipik’ competition came after the music school had to halt its classes due to a lack of funds.

‘Mizik Dan Lapo’ emerged as the grand winner of the competition ahead of 24 other Mauritian groups.

“These kids come from difficult backgrounds, and are faced with social problems on a daily basis, so it is good that through music they have been able to win first prize and get to travel to Seychelles,” said Toulouse.

Mizik Dan Lapo has 20 members, but only the ten who took part in the ‘Sega Tipik’ competition travelled to Seychelles for the exchange programme.

At the end of the cultural exchange in Seychelles participants of both the Mauritian and Seychellois groups were awarded certificates.

Speaking at the event, the Seychelles’ Principal Secretary for Culture, Benjamine Rose said that such exchanges between the two islands should continue.

“We hope to have future exchanges so we can further learn from each other and promote our traditional music,” said Rose.

A group of young Seychellois musicians are expected to travel to Mauritius for a similar exchange.