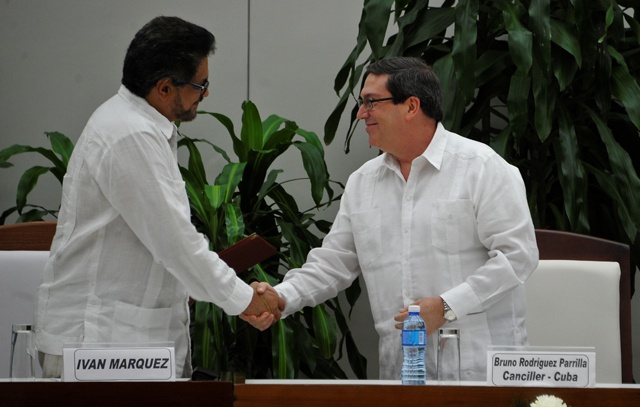 (AFP) - Colombia's government and Marxist FARC rebels on Saturday announced a revised peace deal to end 52 years of armed conflict, after voters rejected a prior peace accord in a referendum.

"We have reached a new final agreement to end the armed conflict, which incorporates changes, clarifications and some new contributions from various social groups, which we have gone through one by one," said a joint statement read out by diplomats from Cuba and Norway, the peace process guarantors.

"Building a stable, lasting peace must be the shared commitment of all Colombians, and one that helps polarization be overcome while including all social and political voices," the statement added.

President Juan Manuel Santos stressed: "It is a better agreement."

The new accord was fine-tuned after the groups that opposed the original deal submitted proposed changes as starting points for negotiations.

"We are convinced that this documents highlights viable and possible paths" to end the conflict, said the government's lead negotiator Humberto de la Calle.

"The tweaks and clarifications we have made do not undermine the issues we agreed on, which shaped the first peace deal," he said.

An upbeat chief rebel negotiator Ivan Marquez said "the only thing the new accord needs now is to be put into effect."

At the moment, neither side has made any mention of the new peace deal's being put before a new referendum vote.

The United States hailed the agreement, and pledged continuing US support in implementing a peace under which the guerrillas would demobilize and become a political party.

The Revolutionary Armed Forces of Colombia (FARC) and Santos' government had been meeting since October 22 to try to rescue a peace deal that has taken four years to negotiate.

In an October 2 referendum, voters unexpectedly rejected the peace agreement that they came up with, deeming it too soft on the country's largest rebel group.

Talks with the smaller ELN (National Liberation Army) are on hold over government demands it first free all hostages.

The development was a blow to Santos, who won the Nobel Peace Prize last month for his efforts to bring "total peace" to Colombia.

Talks with the smaller ELN (National Liberation Army) also have been on hold over government demands it first free all hostages.

But US National Security Advisor Susan Rice said the revised agreement was "a testament to the commitment shown by all sides, including those who did not support the original accord, to ending this 52-year conflict and building a just and lasting peace in Colombia."

She commended Santos "for forming an inclusive national dialogue to incorporate into this revised agreement concerns of those who voted against the initially proposed peace agreement."

Founded in 1964, the FARC and the ELN are the last two leftist guerrilla groups involved in a messy, multi-sided conflict that has killed more than 260,000 people, left seven million displaced and 45,000 more people missing.

Santos's government had been due to open peace talks with the ELN, Colombia's second-largest rebel group, on October 27.

But he called them off when the rebels failed to release ex-congressman Odin Sanchez, which he had set as a pre-condition.