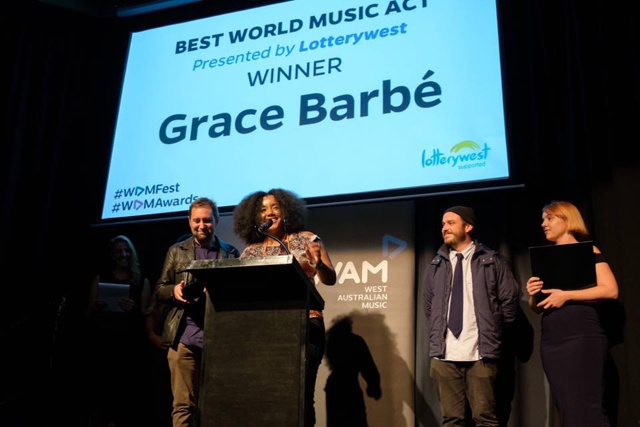 (Seychelles News Agency) - Grace Barbé, a Seychellois artist living in Australia, says she feels proud to be recognized and rewarded for creating music that tells stories of her roots and culture.

Speaking to SNA in an email interview this week, Barbé said that the award means a lot as her career is not only about representing original and contemporary music, but also the Creole music and culture.

“There is a sense of pride that comes with being recognized, acknowledged and awarded for music that tell stories of your roots and culture. Music that captivates rhythms of the islands. Music that is not only sang in English, but also in Creole and French. I would not have created what I am creating now without that sense of culture, community and purpose,” she told SNA.

It’s the seventh 'Best World Act' prize won by Barbé and her band, alongside two ‘Song of the Year’ award, presented by the West Australian Music, during the course of her music career.

The nomination process for the award has a high threshold. A nominee must impress judges in the categories of originality, active performance, branding, touring, marketing and publicity, song writing, recordings, musicianship, and popularity.

West Australian Music is a body that aims to support, nurture and grow all forms of contemporary music helping artists to be recognized in Australia, as well as internationally. Having a number of awards in place is one of the ways it helps artists to get ahead.

Grace Barbé, who was born on Mahe, the Seychelles main island, moved permanently to Australia at the age of 16 where she started off performing for the Seychellois community living in Perth. Her mother and veteran musician Perley Hoareau known as ‘Ton Per’ -- one of the founding and original members of the Seychelles 60s band Le Boys -- are the two persons she describes as her mentors.

Barbé’s most active years on the music scene spans over the last decade, together with her trio-band called Grace Barbé Afro-Kreol, comprising of herself playing the bass guitar, Jamie Searle playing the guitar and her sister, Joelle Barbé on the drums. Together they have developed what she calls their own unique sound -- ‘Afro-Kreol.’

“In a way, I see myself and my band have created a platform in promoting music and culture of the Indian Ocean island region- Seychelles, Mauritius, Rodrigues, La Reunion, Mayotte and Madagascar, while also developing our own sound,” she told SNA.

“Music from the Indian Ocean islands need to be pushed, promoted and supported a lot more on a global scale, but it requires the right team of people, the right artists, the right materials/product and the enough resources for support. It's not easy but it is not impossible.”

Barbé, 36, is currently based in Fremantle, Western Australia where she is also a music and vocal teacher at schools, aside of her frequent performances for Australian audiences.

The Seychellois born artist also conducts dance workshops where she is constantly referencing the use of the word ‘coconuts’, telling her students not to be afraid to shake their beautiful ‘coconuts’ (their buttocks!) while she shows them how to dance the tinge, moutya and sega – some of Seychelles’ traditional music.

One of her upcoming project is the worldwide release of her first vinyl record this coming Saturday November 19, which will be a remix of a track -- Afro-Sega -- from her ‘Welele’ album by Tony Allen – a well-known Nigerian drummer, who lives in Paris.

“Tony Allen was invited to perform at the prestigious Perth International Arts Festival a few years back and we opened for him. He expressed an interest in remixing one of our tracks. With Afro-Sega, he completely re-recorded the song with his band in Paris, retaining only my vocals from the original recording,” said Barbé.

In the meantime Barbé and band are also slowly working on finishing their next album.

“We like the idea of taking our time between albums and projects, and to do it properly. There is no real rush. It is important to get the music out but the process has to be enjoyable and the timing and product have to be right,” she concludes.