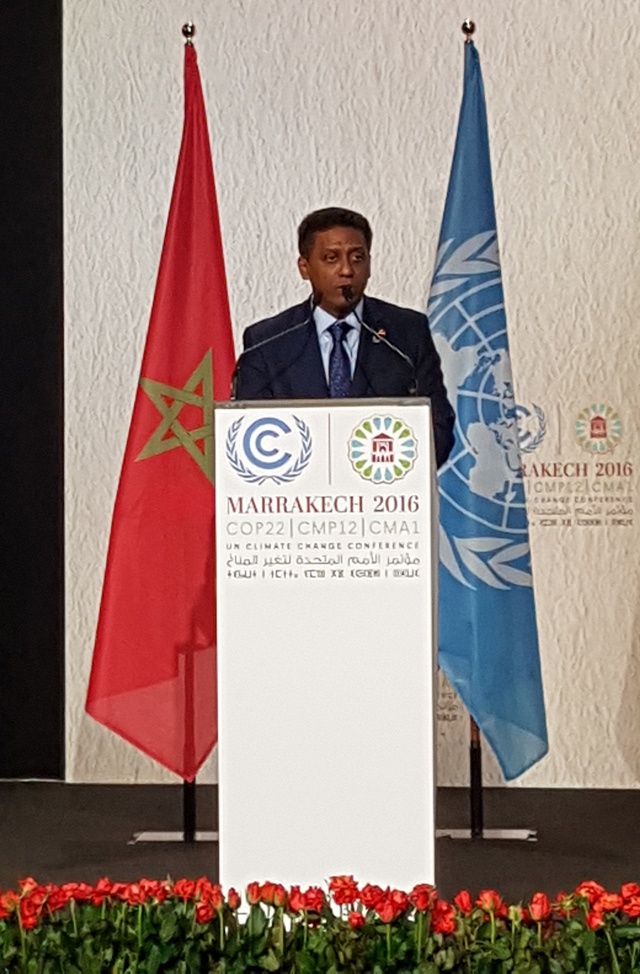 Seychelles President Danny Faure addressing the 22nd session of the Conference of the Parties (COP22) to the United Nations Framework Convention on Climate Change, in Marrakech, Morocco on Tuesday. (State House)

(Seychelles News Agency) - The president of Seychelles, Danny Faure, has called on the international community to make available funds for climate financing, with increased access to funding for vulnerable small island states like Seychelles, a State House statement said on Wednesday.

Faure on Tuesday addressed the 22nd session of the Conference of the Parties (COP22) to the United Nations Framework Convention on Climate Change, being held in Marrakech, Morocco.

He said that increased financing “will allow for continued development of SIDS [small island developing states] and the ability to aggressively transition to sustainable economies.”

The Morocco meeting is President Faure’s first participation in a major international event since he assumed the Seychelles presidency in October.

He is among world leaders attending the COP22, which is focussing on actions needed to achieve the priorities of the Paris Agreement. The deal reached during the COP21 meeting in France’s capital, Paris, last December, saw the 195 participating countries adopt the first global agreement on climate change. This is a binding treaty that aims to limit global warming to below 2 ° C.

President Faure noted that Seychelles -- as a member of the Alliance of Small Island Nations (AOSIS) -- is proud to have played an important role to ensure the successful outcome of the Paris meeting, describing the new climate deal as one that gives renewed hope to the world.

He said that Seychelles, like other island states, views climate change as an “existential threat challenging all aspects of its chances for future survival.”

Faure said that the agreement which unites the world in action on climate change calls for a “paradigm shift” as countries moves from negotiations to implementation.

According to the State House statement, Seychelles has added its voice to that of other island states rallying the support of countries and development partners.

The statement adds that President Faure emphasized on the urgent need for means of implementation, in particular access to finance, capacity building, and technology, public and private investment, to be made available to all.

“So far the $100 billion a year by 2020 figure reaffirmed in Paris has yet to fully materialise and it still remains to be seen whether adaptation finance will be scaled up to the same levels provided for mitigation as promised,” said Faure.

Almost 200 nations are being represented to work out ways to implement the 2015 Paris agreement to limit greenhouse gas emissions.

According an article on the COP22 website, the United Nation’s secretary-general, Ban Ki-moon, addressed the conference on Tuesday saying that action on climate change has become “unstoppable.”

Ban also expressed hopes that US president-elect, Donald Trump, would drop plans to quit a global accord aimed at weaning the world off fossil fuels, the website adds.

The Paris Agreement is the first legally binding treaty aimed at combatting climate change. The agreement entered into force on November 4, when it had been ratified by at least 97 of the 197 parties of the United Nations Framework Convention on Climate Change.