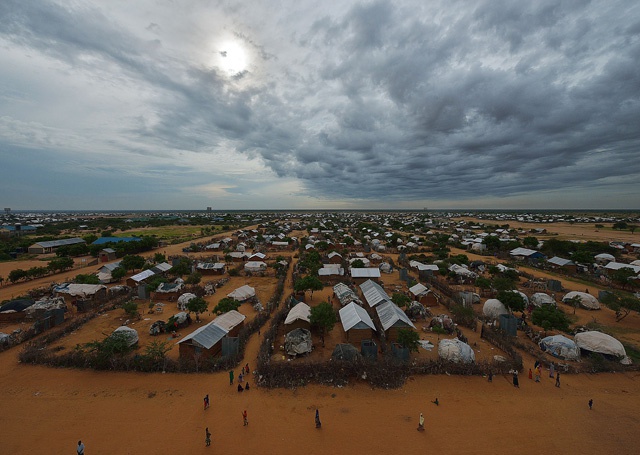 This file photo taken on April 28, 2015 shows an aerial view of the part of the eastern sector of the IFO-2 camp in the sprawling Dadaab refugee camp, north of the Kenyan capital Nairobi. (TONY KARUMBA/AFP)

(AFP) - Kenya on Wednesday agreed to suspend the closure of Dabaab refugee camp, the world's largest, for six months after coming under fire over the fate of its 280,000 inhabitants, most of them Somalis.

The decision to push the deadline back to May 2017 comes just two weeks before the camp was scheduled to close and follows mounting concern that Somali refugees, some of whom have lived in the camp for 25 years, were being forced to return against their will.

"I wish to announce that the government has accepted the request to extend the deadline for the completion of the repatriation of Somali refugees and the eventual closure of Dadaab refugee complex by six months," he told a news conference.

Nkaissery said a comprehensive repatriation programme would be rolled out next month at the sprawling camp, home to Somali refugees since the outbreak of civil war in 1991.

"The repatriation will continue to be carried out in a humane, safe and dignified manner," he said.

The government announced in May that the vast Dadaab camp in north-east Kenya near the Somali border would be shut down, citing security concerns.

Since sending troops into neighbouring Somalia in 2011, Kenya has come under repeated attack from Shabaab, East Africa's long-time branch of Al-Qaeda.

Nairobi has taken a hardline position, claiming Dadaab acts as a terrorist training ground for Shabaab Islamists and that both the 2013 attack against Nairobi's Westgate shopping mall and the 2015 attack at Garissa university were planned at Dabaab.

On Wednesday, Nkaissery pledged to abide by international law during the six-month resettlement of refugees to Somalia or to a third country while sticking to plans to close the camp.

"Delaying the closure of the camp by six months is certainly better than deporting the refugees in two weeks. But with the new date... the refugees will continue to feel that they must leave," said Gerry Simpson, a researcher at rights group Human Rights Watch (HRW).

"Such coerced returns are illegal. Kenya should end its threats to close the Dadaab camps and the UN refugee agency and donors should press Kenya to publicly reassure Somalia refugees they are welcome in Kenya until it safe for them to return."

In September, HRW warned in a report that the repatriation of Somalis from the sprawling Dadaab camp violated international standards and that refugees were returning home involuntarily only to face persecution and hunger.

The Kenyan government dismissed the report.

Refugees will be returning to a country that already has over one million people displaced from their homes, where five million lack enough food and where African and Somali forces are still fighting Al-Qaeda-aligned Shabaab militants.

Amnesty International said that a verification exercise carried out by the Kenyan government and UNHCR in July and August had concluded that only 25 percent of refugees were willing to return.

Refugees said the authorities had threatened they would be forced to leave if they did not go and would miss out on a UNHCR repatriation allowance if they refused to leave, Amnesty said.