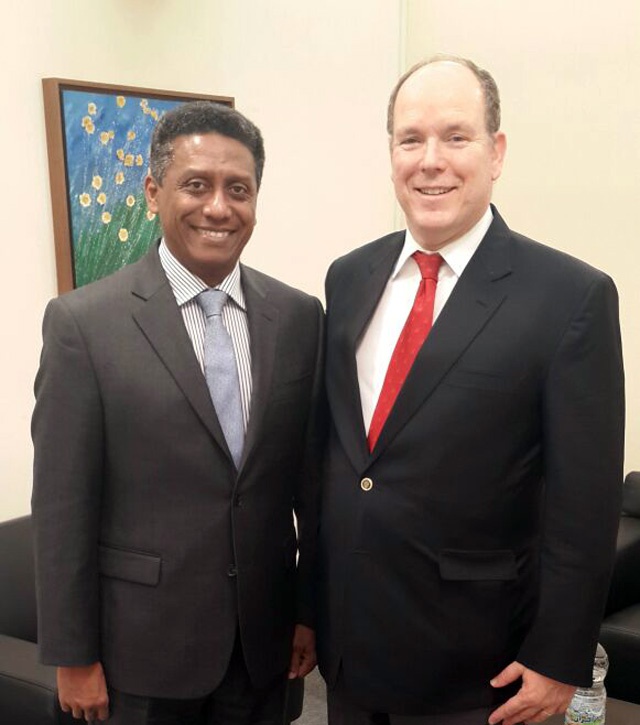 (Seychelles News Agency) - The Seychelles President Danny Faure has held discussions aimed at addressing issues of common interest, as well as enhancing cooperation with officials from Monaco, Morocco, and St. Vincent and the Grenadines, State House said on Friday.

President Faure held bilateral talks with officials from the three countries on the margins of the COP22 environmental meeting held in Marrakesh this week.

His discussions with Prince Albert II of Monaco focused on how the two countries can collaborate and effect change on global issues, particularly on climate change and raising awareness on the need to include oceans in the implementation of the Paris Agreement.

President Faure noted that Seychelles and Monaco enjoy “excellent relations.” Their meeting focused issues of common interest including ocean governance and the need for action to address the vulnerabilities of small nations. Environmental protection and research were highlighted as areas of potential cooperation highlighted.

“The conservation of the coco-de-mer and the need to further strengthen various research projects on the World Heritage site of Aldabra were identified as tangible areas of collaboration between the two countries,” the State House statement said.

During President Faure’s meeting with the Prime Minister of Morocco Abdelilah Benkirane, it was agreed that there is a need to enhance cooperation between the two countries, and further explore areas that would benefit their people.

A State House press statement on Friday said, health, tourism, capacity building assistance in the fields of sports, and law and order were key areas of potential cooperation discussed.

“Cooperation in the health sector through the assistance of Moroccan medical specialists for Seychelles in the form of a medical professionals program was one of the main topics of discussion between the two leaders,” the statement reads.

Speaking to the Moroccan press after the meeting, President Faure described as fruitful his meeting with the Moroccan Prime Minister.

“We are very happy we also met with His Majesty King Mohammed VI of Morocco. We congratulate him and thank him for his strong leadership in moving the cause of Small Island Developing States and the cause of climate change forward,” Faure is quoted as saying.

The Seychellois head of state has also extended an invitation for Prime Minister Benkirane to visit Seychelles, a 115-island archipelago in the western Indian Ocean.

Common initiatives pursued by two island nations to defend issues of mutual interest and importance on the international front were among the main topics of discussion when President Faure met with the Prime Minister of St. Vincent and the Grenadines, Ralph Gonsalves.

According to a State House statement, they emphasized on how the adverse effects of climate change impact on the two countries’ efforts to fully achieve the UN’s Sustainable Development Goals.

“They agreed that the work to implement the Paris Agreement must be motivated by a renewed sense of commitment from the international community,” the statement reads.

President Faure and Prime Minister Gonsalves also expressed their willingness to consolidate existing ties between the two island nations, citing the need for more dynamic exchanges in various areas including tourism, culture, reform of the public sector, and people-to-people exchange.

The strengthening of cooperation in areas of security and human resource development was also evoked.

“They explored additional ways of improving trade and economic relations through capacity building, the signing of a double taxation avoidance agreement, and close collaboration in the area of renewable energy,” the State House statement said.

President Faure confirmed that the two sides have considered proposals to enhance cooperation to drive growth and improve the lives of their people, adding that both countries have much to learn from each other, in various fields.

“The building of stronger alliances between the Indian Ocean region and the Caribbean is pivotal in this globalized world, if our common aspirations as island nations are to be realized and our people empowered towards sustainable development,” President Faure said.

President Danny Faure was leading the Seychelles delegation at the COP22 meeting in Morocco which ended on Friday.

Pope rounds off Morocco visit with mass for thousands