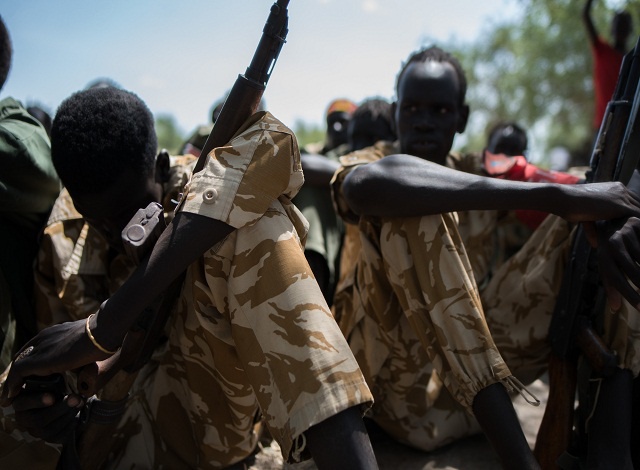 Child soldiers after being released from a group called the Cobra Faction and from the main SPLA/IO rebel faction in Tenet, near Pibor. The United States on Friday proposed that South Sudan's rebel leader Riek Machar, its army chief and its information minister face UN sanctions for fueling violence in the war-torn country. (Charles Atiki Lomodong / AFP)

Machar, President Salva Kiir's army chief Paul Malong and his information minister Michael Makuei are on a sanctions blacklist circulated to the Security Council, in a text seen by AFP.

Under the proposed measure, Machar, who is receiving medical treatment in South Africa, and the two senior officials would face a global travel ban and an assets freeze.

The sanctions list was presented after the United States on Thursday put forward a draft resolution on imposing an arms embargo on South Sudan, where a civil war has raged since December 2013.

In the document sent to the council, the United States said Machar had declared war on Kiir's government in September after fleeing the capital during heavy fighting two months earlier.

The former vice president has entered into alliances with militia groups in Equatoria province to overthrow the government. Those forces have raided villages, abducted civilians and aid workers, the document said.

The United States accused Malong of trying to kill Machar who had returned to Juba under heavy international pressure to serve in a national unity government.

Malong, the military chief of staff since 2014, "was responsible for efforts to kill opposition leader Riek Machar" and knowingly disobeyed Kiir's orders by sending tanks, helicopter gunships and troops to assault Machar's residence in July.

After Machar fled Juba, Malong wanted the army to attack his position immediately and informed army commanders that "Machar was not to be taken alive," the document said.

Information minister Makuei was cited for ordering the closure of the Juba airport in April to prevent the return of Machar to the capital.

He also declared that South Sudan would treat troops from a proposed UN regional force as "invaders" if they deployed without Juba's approval, the document said.

The council has imposed sanctions on six commanders -- three from the government side and three among the rebels.

Russia has made clear it opposes an arms embargo, arguing that it would further sour relations between South Sudan's leadership and the international community.

Deputy Ambassador Petr Iliichev declined to specify Friday whether Russia would veto the draft resolution, but added that Moscow feels "very strongly" that a ban on weapons sales was ill-advised.

"It's going to affect very negatively the small progress that we have achieved, especially on trying to re-start the inclusive process if we are going to sideline the leaders," Iliichev told reporters.

US Ambassador Samantha Power said Thursday that months of talks with South Sudan's leaders had failed to persuade them to opt for peace as she made the case for sanctions.

"There is no good reason why we would not deprive those who have shown a willingness to commit mass atrocities of the means of doing it more efficiently," she said.

The country won independence from Sudan in 2011 with strong support from the United States.

A peace deal between Kiir and Machar in August last year had raised hopes of peace, until clashes erupted in Juba four months ago.