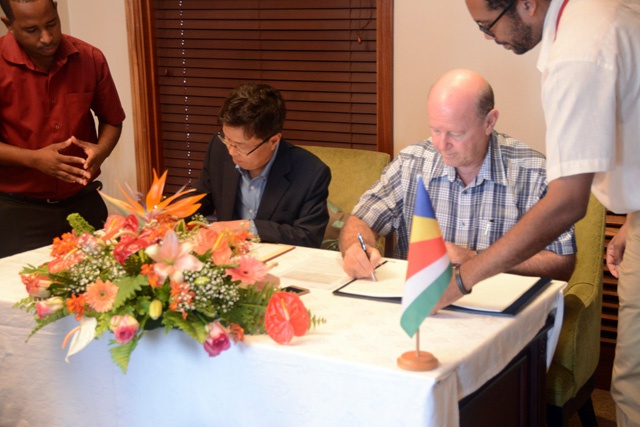 The signing of a new air service agreement between Seychelles and South Korea comes now that the two countries are commemorating 40 years of diplomatic relations in 2016. (Seychelles Civil Aviation Authority)

Ambassador Kim had already identified tourism as one of the key focus of his mandate when he was accredited in April 2015.

Speaking at the signing, the South Korean ambassador said that “from now on I want to highlight the importance of people-to-people exchange.”

“By this ground work I am sure more Koreans will come to Seychelles, and I want to see more opportunity for Korean people to visit this beautiful island and vice versa,” he added.

According to information provided to SNA by the Seychelles Civil Aviation Authority, visitor traffic from South Korea has grown from 84 visitors in 2009 to 1,371 in 2015. A total of 1,307 South Korean tourists have flown to the 115-island archipelago in the western Indian Ocean so far in 2016.

Minister St.Ange is also keen on seeing the new agreement pave the way for possible air links to serve the tourism industry – the main pillar of the island nation’s economy.

“The vehicle to open doors between Korea and Seychelles is the air link and the air link becomes possible when tourism is working,” St. Ange said, adding that tourism can also open doors to other possible cooperation, including trade.

The Chief Executive of the Seychelles Civil Aviation Authority, Gilbert Faure, told journalists that the agreement has been on the table since 2010. He said that the signing confirms the intention of both sides to have air connectivity that would benefit not only tourism but other sectors of both countries’ economy.

“In Seychelles there are two things we are familiar with, their [South Korea’s] Kia and Hyundai vehicles and Samsung brand. South Korea is a high-tech and very developed country,” Faure said.

While under the agreement there can be seven weekly flights between the two countries, Faure noted that it’s only market forces that can dictate what is feasible, and when flights can start.

In the meantime he said “if tomorrow South Korea wants to have two or three chartered flights while it’s scheduled market has not been developed, if it wants to bring in cargo directly from South Korea these are allowed under the agreement.”

The signing comes now that Seychelles and South Korea are commemorating 40 years of diplomatic relations in 2016.

Minister St Ange said that the two countries have enjoyed good and cordial relations over the years, while Ambassador Kim described Seychelles as a "staunch supporter and friend in all areas, particularly economic cooperation."

Ambassador Kim noted that Korea being a peninsula country and Seychelles being an island country, the two sides have a lot in common highlighting the environment, fisheries and other maritime issues adding that he believes the two countries will continue to have better, stronger, more durable relations.