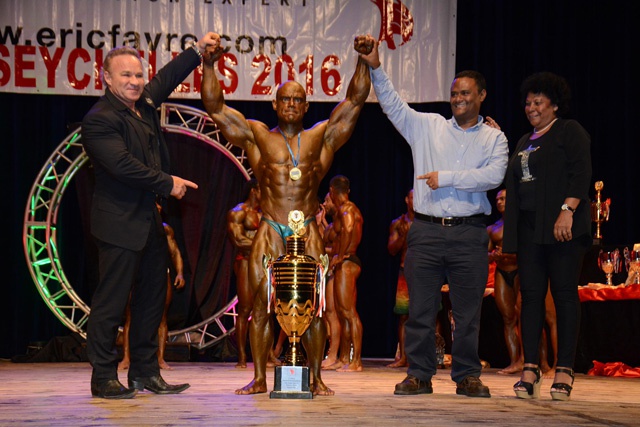 (Seychelles News Agency) - Bodybuilder Ziad Mekdachi on Saturday fulfilled a promise made to his fans, winning a regional bodybuilding competition held in Seychelles.

Speaking to the media after the competition, the Seychellois bodybuilder said he was very happy and proud of his achievement.

“I promised everyone that I would keep this trophy here in Seychelles and I did,” said Mekdachi, who competed in the +95kg of the seniors’ category.

The 37-year-old bodybuilder, who described his preparation for the regional meet as intensive, said that the competition was not as challenging as he expected.

This is Mekdachi’s first win of an international competition in 2016, although he did win a bronze medal in the ‘Arnold Classic’ bodybuilding competition held in South Africa in May.

Following Saturday’s success, which adds to his fifth Mr. Seychelles won earlier in November, Mekdachi concludes that 2016 has been the best season of his sporting career.

“It is a big success, couldn’t be better…there are no words to describe what I have been through,” he told SNA.

A large crowd of bodybuilding enthusiasts filled up the International Conference Centre in the Seychelles capital, Victoria, to watch the flexing of muscles as some 60 athletes took to the stage in he Eric Favre Classic Grand Prix.

It took about six hours for the athletes coming from the Indian Ocean islands of Reunion, Mauritius, Rodrigues, Madagascar as well as one competitor from France to pose and show their buffed physique in front of a panel of judges.

The competition also included a Miss Bikini Segment, which is common in international competitions, targeting women going to the gym for toning and sculpting their physique.

The task of judging lay with a panel which included Morgan Aste from France known as ‘The Big Rock’ in the bodybuilding industry as well as French Professional Miss Bikini Champion Nathalie Mure.

The Seychelles competition was the fourth edition of the Eric Favre Classic Grand Prix for the Indian Ocean region.

The competition is an initiative of French national Éric Favre, a former bodybuilder and an international coach working with the International Federation of Body-Building (IFBB). He also organises other sporting events in other parts of the world under the banner of Eric Favre Sports Games.

Favre told SNA that he is impressed with the organization of the competition and that all bodybuilders performed at a very high level.

“All the islands Reunion, Maurice, Rodrigues who came here to participate really brought their ‘A’ game and we really built a great relationship in a sport that does not have much money,” said Favre, adding that Seychellois athletes were excellent.

The next Eric Favre Classic Grand Prix for the Indian Ocean region will be held next November in Reunion Island.