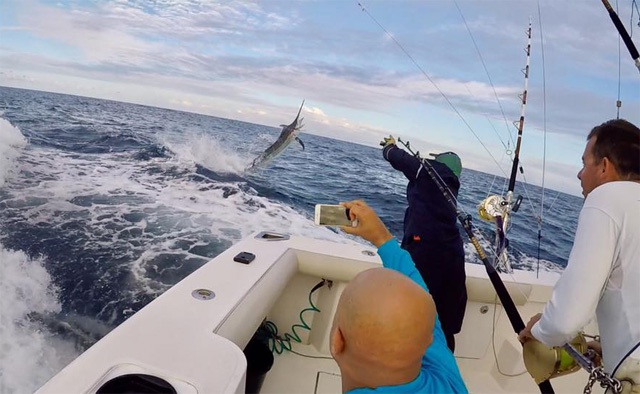 According to the Seychelles Sports Fishing Club the total number of billfish tagged and released over the past two years stands at 771. (Faizal Suleman)

(Seychelles News Agency) - The number of billfish species – such as marlins, sailfish and swordfish -- tagged by sports fishing enthusiasts in Seychelles more than doubled in 2016.

According to the Seychelles Sports Fishing Club (SSFC) a total of 520 billfish had been tagged and released at last week’s closing of the SSFC/Masons Travel conservation league.

The numbers surpassed the target of 500 set for 2016, and broke last year’s record of 251 billfish tagged and released.

SSFC has described the conservation efforts of its members as an “amazing accomplishment.”

A two-year effort to conserve billfish in Seychelles

He said that the “impressive increase” in tag and release among the sports fishing and recreational fishing community in Seychelles will help this sector of the economy grow.

“International media typically does not feature destinations who do not conserve since conservation is a major component of a top sports fishing destination,” Heyer told SNA.

Species caught are fitted with a standard tag from the Billfish Foundation and released back into the ocean – but only after information about its size, weight and location of capture are recorded. Through this conservationists can get a better idea of where fish caught in Seychelles waters go after they are captured and released, as well as gather data on how many fish the island nation's anglers catch over the year.

Over 700 billfish tagged and released

According to SSFC, the total number of billfish tagged and released over the past two years stands at 771. Heyer told SNA that the club’s target for 2017 is to reach 1,000 tagged billfish and go above the 520 recorded in 2016, adding that the annual conservation league helps to put Seychelles in the spotlight.

“We are not a part of any big research programme, but rather doing it on our own, and applying the principle in our own fishing,” Heyer said. “Our conservation league is one of the top performing billfish conservation programs in the Indian Ocean and we are competing with Australia.”

Interestingly, the 500th billfish tagged in Seychelles on November 11, was done by Sam White -- Senior Editor of Marlin Magazine – on the eve of one of SSFC’s competition the ‘Big Game Classics.’

White caught his first black marlin ever, having caught all other species of Marlin before.

In an email interview with SNA after leaving Seychelles on Friday, White said catching the black marlin, which weighed between 130-150kg, was an amazing accomplishment.

“I just happened to be in the right place at the right time but it was also my first black marlin,” he said.

White was in Seychelles at the invitation of a friend -- Henry Riggs-Miller -- to write an article for Marlin Magazine on offshore fishing, especially for marlin and sailfish, in the 115-island archipelago in the western Indian Ocean.

The U.S.-based Marlin Magazine is the world's premier sports fishing magazine and reaches nearly one million readers a month.

White who enjoyed fishing trips off the main Seychelles island, Mahe, and also off Denis Island, said he was impressed to see the conservation work being done by the SSFC.

White said: “Having shifted the entire mentality from "kill every billfish" to "tag and release all billfish" in just a few short years is amazing.”

He added that from his experience on big game fishing, Seychelles’ plan was forward-thinking especially in terms of tagging.

“Other areas have come a long way with moving to all release for billfish, but few have included a distinct importance on tagging,” he said.

Seychelles, a 115-island archipelago in the western Indian Ocean and surrounded by an Exclusive Economic Zone of 1.3 million square km, is known to have one of the richest big game fishing grounds in the world. Heyer is hoping that the new partnership with Marlin Magazine will help to elevate the archipelago’s sports fishing activities to new heights. ‎

While the winners of the sports fishing league were rewarded at the weekend, the sports fishing club is encouraging more people to join next year’s league, adding that free tags are provided to those who want to support the program. According to Heyer, the 2016 conservation league saw the participation of anglers from 25 different countries.

Since it started the conservation programme, SSFC has also been approached to share expertise in at least two fish-tagging projects being implemented by the Seychelles Fishing Authority.