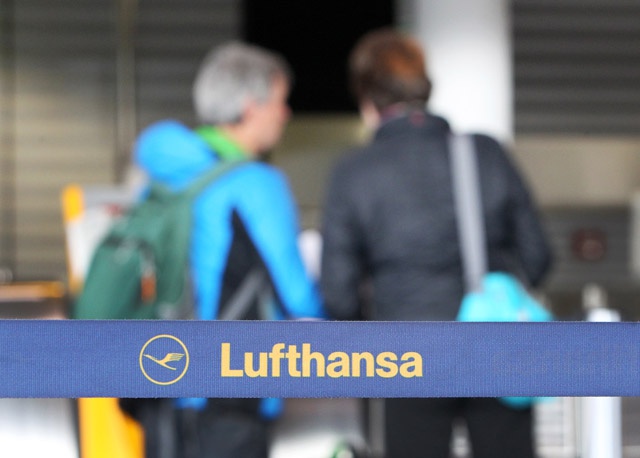 Passengers are waiting at rebooking counter installed due to a strike of pilots of German airline Lufthansa at the airport in Frankfurt am Main, Germany, November 23, 2016. (DANIEL ROLAND/AFP)

The airline had already scrapped nearly 900 flights that affected 100,000 passengers on Wednesday after pilots staged a walkout in a row over pay and working conditions.

Further disruptions are expected on Friday, as the pilots' Cockpit union has called for the industrial action -- its 14th since April 2014 -- to continue through Friday when short-haul flights are expected to be hit.

The Lufthansa pilots going on strike are demanding a pay rise of an average of 3.66 percent per year, retroactive for the past five years.

Their union says pilots have endured a wage freeze over that time and suffered a "significant loss of purchasing power" due to inflation, while Lufthansa has made billions in profits.

It had offered a 2.5 percent wage hike.

Lufthansa has urged the Cockpit union to work towards a resolution rather than escalate the problem.

"Cockpit's demand for a pay rise... goes far above what other groups of employees have received. It is incomprehensible why the union is seeking the highest salary increase for the best paid group of employees," said Bettina Volkens, Lufthansa's human resources chief.

Lufthansa has been battling a series of walkouts by both cabin crew and pilots over the last two years, as it aims to bring down costs to survive competition from low-cost rivals such as EasyJet and Ryanair.

In July, it brought an end to the long-running industrial dispute with cabin crew through a deal on pay and working conditions, including a no-strike agreement and job guarantees until 2021.

Lufthansa group's other airlines -- Germanwings, Swiss, Austrian Airlines, Air Dolomiti and Brussels Airlines -- are not affected by this week's strike.