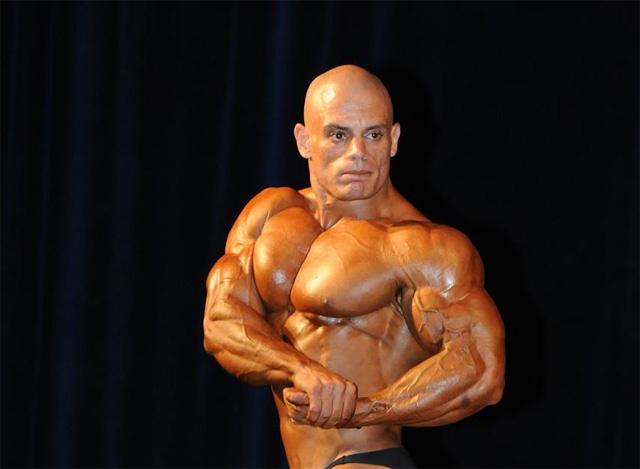 Along with a bronze medal in the ‘Arnold Classic’ bodybuilding competition held in South Africa in May, 2016 has been a fruitful season for the 37-year-old who started bodybuilding in 2009.

Mekdachi was born in Beirut, Lebanon, to a Lebanese father and a mother from Seychelles. He came to Seychelles, a group of 115 islands in the western Indian Ocean, in 2006. Like his dad he is married to a Seychellois and has a 7-year old son.

SNA caught up with Mekdachi now that his 2016 has come to a close.

SNA: For only seven years in bodybuilding you have done amazingly well – tell us how you entered the world of bodybuilding

ZM: It was not something I planned. One day I was preparing for the kickboxing world championship which was to take place in Beirut. I was in a break and my brother said let’s go and try bodybuilding. I said okay I will try and since that day I never stopped.

SNA: So bodybuilding was not your first choice?

SNA: What does it take to become a bodybuilder?

ZM: You need to be morally strong because it is not something where you go to the gym and lift weights -- it includes dieting, discipline and determination. It takes all of that to become a bodybuilder. It’s not easy to become a true bodybuilder.

SNA: You mentioned dieting – is that important in bodybuilding?

ZM: You have to watch your diet 90 percent of the time. Bodybuilding season is divided into two – the pre-contest period and the off-season. Take an instance my 2016 season -- I had three competitions – an international one in May, a short break and then Mr. Seychelles and Mr. Indian Ocean. I diet for six months. So for me bodybuilding is not a sport it’s a lifestyle. It goes with you everywhere, in the gym, at home -- you have to eat clean and healthy food and get enough hours sleep.

SNA: Does that mean you need to watch what you eat?

ZM: Dieting for a bodybuilder is a form of manipulation because everything needs to be measured and planned -- like how many meals you take per day. During the season you need to monitor your calories especially carbohydrates as you are preparing your body for competition. It is also a mix of alimentation and supplements.

SNA: What is a typical day for you?

ZM: I wake up in the morning, have breakfast and then go to the gym and if I have something planned, I work on it. Immediately after I take my supplement -- then I go home. If I have the chance to rest I do, if not I go to work.

SNA: How do you balance your career with bodybuilding?

ZM: I am lucky in that aspect because my work is in the same field as bodybuilding. I am a personal trainer so when I am not training -- I am training others.

SNA: What do you enjoy most about bodybuilding?

ZM: Everything -- it’s a self satisfaction and a never ending process. The more I do it I progress further and gain muscle maturity and learn many things. It’s incredible.

SNA: What keeps you motivated as a bodybuilder?

ZM: I think it's love for bodybuilding and for me its my life it makes me happy.

SNA: You’ve won Mr. Seychelles five times -- what does that mean to you?

ZM: It’s a personal achievement and it’s worth every effort -- the dedication and the determination. It makes me proud and I look forward to see how far I can go. I think that when the day comes for me to retire people will still remember me in bodybuilding.

SNA: You won Mr. Indian Ocean last week-end – How did that feel?

ZM: It’s special in terms of achievement as I have won medals in other higher level competitions. This is special because it was hosted in our country and it was the first time I competed with foreign bodybuilders in front of my family and friends.

SNA: How do you see bodybuilding in Seychelles?

ZM: It is improving especially more so lately as more people are showing an interest. When I look at the past two years and compare to 2009 there is big difference. Athletes are now better prepared.

SNA: What advice would you give to people aspiring to become a bodybuilder?

ZM: If they decide to practice this lifestyle they need determination, discipline and respect for what they are doing. They need to adopt it as a lifestyle.

SNA: What is Ziad’s aim for the future?

ZM: The season 2016 is over and it has been my best season so far. Now I recuperate and keep on dieting until the 2017 calendar comes out. I want to become a professional bodybuilder, it’s my dream and for me I feel that now I am the closest ever to making my dream come true. This will be my ultimate target for 2017.

SNA: Do you feel you have enough support as a bodybuilder?

ZM: Now that people have seen the level of Seychellois bodybuilder I hope that this will help me in my future preparation and get positive response from sponsors. Local sponsors often say they assist team sports and not really individuals. I think they should look more at the outcome – what the athlete is achieving.

I would like to take this opportunity to thank the NSC (National Sports Council) for all the assistance they have provided.