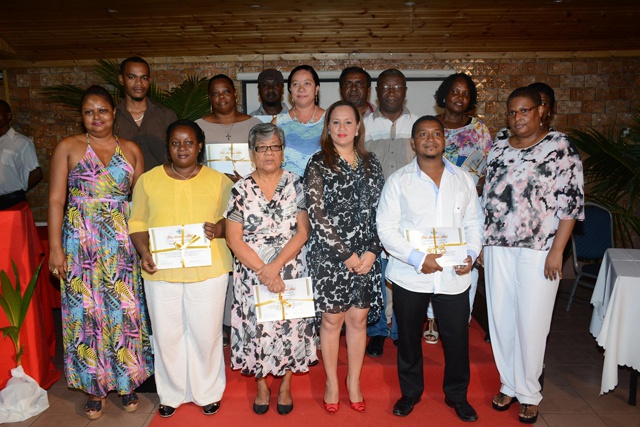 First, second and third prize winners of the different categories of the Antoine Abel Prize pictured with the Seychelles minister responsible for culture Idith Alexander and the two daughters of Seychelles renowned poet and writer Antoine Abel who passed away in 2004. (Patrick Joubert, Seychelles News Agency)

(Seychelles News Agency) - Winners of a biennial national writing contest that encourages the production of literature in the Creole language were rewarded on Saturday in Seychelles.

The ‘Pri Antoine Abel’ [Antoine Abel prize] encourages Seychellois writers to submit work in various categories, in the native language of the Seychellois people. The fourth edition of the literary contest saw the participation of writers in five categories: short story, poetry, novel, translation and play.

The presentation of prizes to the best authors coincided with this year’s Arts Festival, which was officially launched on Friday.

Speaking at the event, Flora Ben-David, the newly appointed chief executive of the Creole Institute of Seychelles, which organises the contest, said the Antoine Abel prize is aimed at promoting quality Creole Literature.

“These literature should focus on the thoughts, culture, life and aspiration of the people,” she said.

Marie Therese Choppy and Terrence Crea were rewarded for daring to take on the challenge, as they were the only participants in the play and translation categories, respectively.

Jude Ally, participating for the first time in the national writing contest, was declared winner of the poetry category. Ally, who aside of writing poems, is also an abstract expressionist painter and singer, told SNA that he tries to find time to do all three, although he is more focussed on his abstract paintings.

Marie Cecile Benstrong who submitted the winning short story titled ‘Repantans’ [Repentance] is also a first-timer. Benstrong explained that she is not new to writing stories about life events, but has always kept it as a hobby, away from the public eyes.

Dr. Bernard Valentin who participated in the ‘Pri Antoine Abel’ for the first time in 2013, and captivated the jury’s attention, winning the best overall prize then, on Saturday took home the prize for having written the best novel for this year’s edition of the competition.

Valentin, who submitted a novel titled ‘Moulouk Darmalinganm,' explained to SNA that Darmalinganm is an Indian name, but that his story is about domestic violence, while evoking the interactions which exist in Seychelles between the different races.

“I have been writing since the age of 12, and people who know me will know about my poems and plays. But recently I am concentrating on novels as it provides a bigger platform to express myself, and I am always looking out for a Seychellois context to tell an original story,” added Valentin, who is looking forward to become a judge of future editions of the Antoine Abel prize.

While for the 2013 edition the jury had to decide between two authors for the best overall prize, this year no participant was awarded such a prize, which can go to the person whose work is viewed as the most impressive by judges .

Dr Marie-Therese Purvis, one of the judges of the competition, said that the panel met from February to September to review the submitted work, based on their sets of criteria for each of the different categories.

“It takes a lot of time, but it was an opportunity to see a lot of good work and innovation in the way people write and develop the Creole language,” said Purvis.

The Antoine Abel prize is named after Seychelles’ renowned poet and writer Antoine Abel, who passed away in 2004. His two daughters were among guests at Saturday’s award ceremony.

The literary contest was first launched by Seychellois artist Leon Radegonde, as a regional competition in 1997, promoting literary works in the Indian Ocean region. The contest was launched at the national level by the Creole Institute of Seychelles in 2007, encouraging the participation of literature enthusiasts aged 18 and above.

The former chief executive of the institute Penda Choppy who has overseen the running of the four editions of the national contest, told SNA that although it’s been a challenge to organise the event over the years, the platform has nevertheless allowed Seychellois writers to prove themselves.

Choppy noted that over the years “there’s been a fluctuation in the number of participants” and that the highest number of writers who submitted work was in 2010, when there were 43 participants.

Aside of translations and plays which can be the adaptation of an existing work, the other categories of poems, short stories and novels have to be original

One of the bonuses of being declared one of the winners of the Antoine Abel prize is that the manuscripts end up being published by the Creole Institute.

Choppy said the aim is “for people to be able to read the publications and promote the authors.”

Saturday’s prize giving ceremony therefore saw the winners of the previous edition of the competition being called upon to sign a copy of their work that has now been published, except for Dr. Valentin whose work ‘Lasapel Lanz Nikola’ -- declared the overall winner of the 2013 edition -- will be published in 2017, coinciding with the 30th anniversary of the Creole Institute.