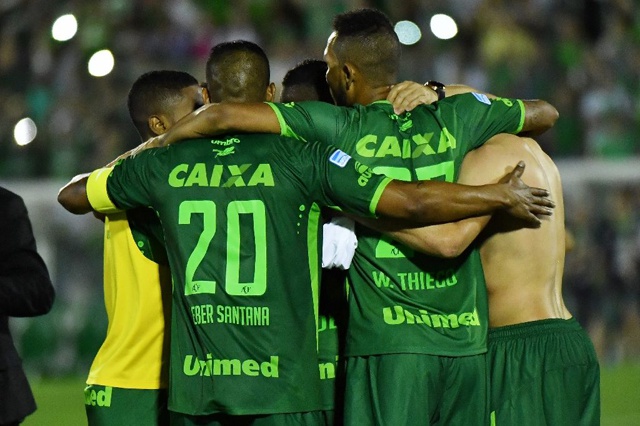 Footballers from Brazil's Chapecoense Real team, shown at a 2016 Copa Sudamericana match on November 23, 2016, have been involved in a plane crash near the Colombian city of Medellin (AFP Photo/Nelson Almeida)

Six people were reported to have survived the crash, including a 25-year-old player, the mayor of a town near the crash site said, without identifying him.

Members of Chapecoense Real, a Brazilian football club that was supposed to play against Colombia's Atletico Nacional Wednesday in the South American Cup finals, were among the 72 passengers and nine crew on board, officials said.

"National police have arrived on the scene and all possible aid is being mobilized because six survivors are being reported," the Jose Maria Cordova de Rionegro airport said in a statement.

The mayor of the nearby town of La Ceja told Blu Radio, "A 25-year-old player was rescued."

The LAMIA airlines flight originated in Brazil and had made a stop in Santa Cruz, Bolivia before continuing on to Colombia.

The airport statement said the plane reported an emergency at 10 pm local time (0300 GMT). "It declared it had electrical failures."

It went down about 50 kilometers from Medellin, Colombia's second largest city, in an area called Cerro Gordo.

Ospina, the La Ceja mayor, earlier told AFP. "It appears that the plane ran out of fuel."

He said authorities were on the scene and hospitals and medical centers were preparing to receive the injured.

On its Twitter account, the Medellin airport said the crash site could only be reached overland because of bad weather in the area.

Colombia's civil aeronautics agency said it had a team at the airport in response to the crash.

"All activities of the confederation are suspended until further notice," Conmebol said.

Atletico Nacional said on its Twitter account it "profoundly laments and expresses solidarity with @chapelcoensereal for the accident that occurred."