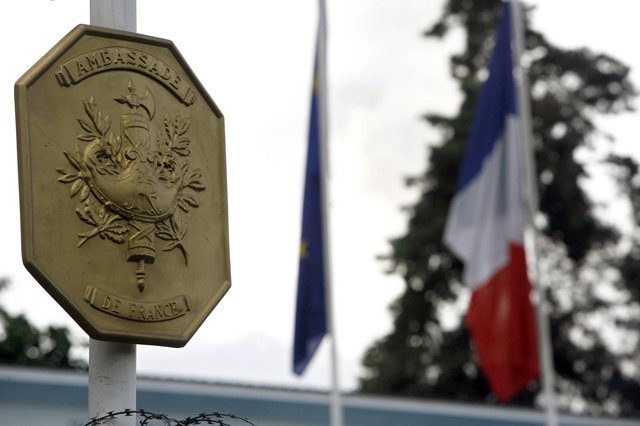 This file photo taken on November 25, 2006 shows the plaque of the French embassy in Kigali. Rwanda opened on November 29, 2016 a formal probe into 20 French officials suspected of playing a role in the 1994 genocide which left some 800,000 dead, the prosecutor general said. (JOSE CENDON/AFP)

(AFP) - Rwanda on Tuesday opened a formal probe into 20 French officials suspected of playing a role in the 1994 genocide, in a move likely to further sour diplomatic ties with France.

Kigali has long accused France of complicity in the genocide of some 800,000 mostly ethnic Tutsis, at the hands of Hutu extremists, angering Paris and straining relations.

"The inquiry, for now, is focused on 20 individuals whom, according to information gathered so far, are required by the prosecution authority to explain or provide clarity on allegations against them," said prosecutor general Richard Muhumuza in a statement.

This will enable prosecutors to decide "whether the concerned individuals should be formally charged or not".

Muhumuza said the relevant French authorities had been contacted and that full cooperation was expected.

The dispute centres on France's role prior to the genocide as a close ally of the Hutu nationalist regime of Juvenal Habyarimana. The shooting down of his plane over Kigali on April 6, 1994 was the event that triggered 100 days of meticulously planned slaughter.

France is accused of missing or ignoring the warning signs, and of training the soldiers and militiamen who carried out the killings.

And when the genocide was in full swing, it was further accused of using its diplomatic clout to stall effective action.

When it did finally send in troops -- in Operation Turquoise -- it was accused of only doing so to counter the advance of the Tutsi rebels of Paul Kagame, who is now president, allowing the perpetrators to escape to neighbouring Zaire which later became the Democratic Republic of Congo.

France says its soldiers were only deployed after most of the killing had happened and that their presence helped save thousands of lives.

And French officials insist that any guilt for failing to prevent the genocide is shared by the entire international community, accusing Kagame of raising the issue in a bid to distract attention from what they say is his own poor human rights record.

When contacted by AFP, the French defence ministry referred to a statement issued on November 16 by Defence Minister Jean-Yves Le Drian after a list of 22 high-ranking French officers suspected of involvement was first published by Kigali.

There was "nothing new" in the list, Le Drian said at the time, adding that it was "almost identical to one produced in 2008" and "to say that the French army took park in genocide was a disgraceful lie".

Although relations between Kigali and Paris were completely frozen from 2006 to 2009, they were on the mend until 2014 when Kagame repeated accusations that French soldiers were both accomplices and "actors" in the bloodbath.

The remarks prompted France to pull out of ceremonies to mark the 20th anniversary of the massacres.

The stormy relationship took an even worse turn when the French judiciary decided in October to re-open an investigation into the shooting down of Habyarimana's plane to hear testimony from a former general who accuses Kagame of being behind the assassination.

"It is France which should be in the dock," said Kagame.

In apparent retaliation, Rwanda on November 1 published the list of 22 senior French officers it accuses of being involved in the genocide.