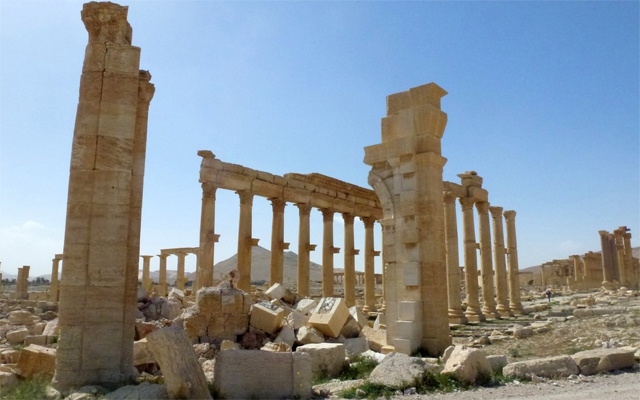 This file photo taken on March 27, 2016 shows a view of the remains of Arch of Triumph, also called the Monumental Arch of Palmyra, that was destroyed by Islamic State (IS) group jihadists in October 2015 in the ancient Syrian city of Palmyra, after government troops recaptured the UNESCO world heritage site from the Islamic State (IS) group. Fifty-five sites out of a total of 1,052 heritage sites around the world, are currently on the UN cultural organisation's list of World Heritage in Danger. (Maher AL MOUNES/AFP)

(AFP) - Representatives from dozens of countries meet in Abu Dhabi on Friday to discuss the creation of a $100-million fund to protect and restore heritage sites threatened by extremism and conflict.

On the eve of the meeting, five Nobel prize winners launched an appeal for urgent action to safeguard world heritage sites, pointing to the irreparable damage wreaked in Iraq, Syria, Afghanistan and Mali.

"Part of our history has been lost forever, with the goal of fanaticism being to undermine our hope for the future," said the statement from Aung San Suu Kyi, Kofi Annan, Ellen Johnson Sirleaf, Orhan Pamuk and Mario Vargas Llosa.

"Urgent action must be taken -- the time for powerless expressions of indignation is over," they added.

The United Nations Educational, Scientific and Cultural Organization, whose director Irina Bokova will deliver an opening presentation, says 55 out of a total of 1,052 heritage sites around the world are listed as World Heritage in Danger.

Delegates from around 40 countries, including more than a dozen heads of state or government, including several Gulf monarchs, will attend the gathering, which is based on an initiative led by France and the United Arab Emirates.

Former French culture minister Jack Lang, who heads the Paris-based Institut du Monde Arabe, said the forum will take "concrete decisions" such as the creation of a fund to help cover the cost of transporting, safeguarding and restoring affected monuments -- including using 3D reconstruction.

France will contribute $30 million to the fund, Lang said.

It will be formed as an "independent legal entity", according to a preparatory document that says it will likely be established in Geneva from 2017.

The conference also aims to establish "refuge zones" around the globe for endangered works of art, according to a source close to organisers.

A French official described the initiative as the "cultural counterpart" of the international military and political war on terrorism.

Hollande, who has called for "asylum rights for artefacts", last month announced that a safekeeping facility is to open in northern France in 2019.

In addition to housing the Louvre Museum's stored collection, it could also be a refuge for endangered artworks.

France is expected to make the proposal during the Abu Dhabi conference.

The Louvre Abu Dhabi, whose delayed opening is now expected in 2017, "could also become a refuge zone" for threatened artefacts, a French official said.

Hollande will visit The Louvre Abu Dhabi on Saturday as well as Al-Dhafra airbase near the Emirati capital from which French warplanes have been flying missions targeting jihadists in Iraq and Syria.