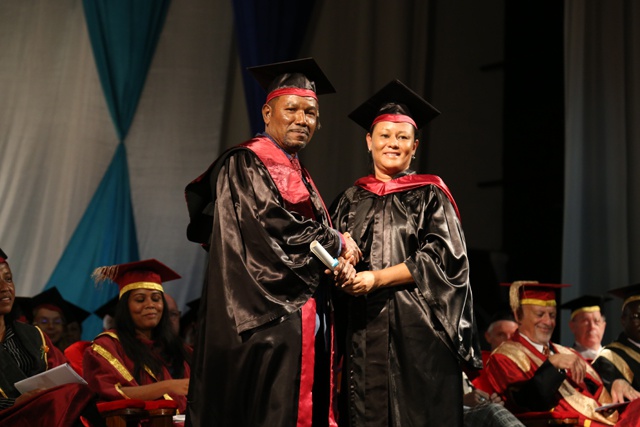 Patrick Victor has received the honorary degree in recognition of his contributions to popular culture as a singer and songwriter and his accomplishments as a playwright and producer. (Jude Morel, Seychelles News Agency)

Victor and Elizabeth were presented with honorary doctorate degrees as recognition for their contribution to society. This was during the university’s 2016 graduation ceremony held on Thursday at its main campus at Anse Royale, in the southern part of the main island, Mahé.

Speaking to SNA on Friday, Victor said he felt honoured and had accepted the award on behalf of all Seychellois artists.

“This award shows that the works of artists are recognized and that artists are doing a lot for the wellbeing of the society,” Victor said, adding that artists in Seychelles have a lot to contribute on issues that affect the society, but feels they are still being marginalized.

“So maybe through this award the message is to shed a new light on our artists and listen to what they have to say,” he told SNA.

Victor, who is well-known for his patriotic songs, is also the patron of the 'Patrick Victor Cultural Foundation’ launched earlier in 2016. This is a platform aimed bringing together people who are passionate about promoting the Seychellois culture.

According to a statement from UniSey, he has been presented with the honorary degree in recognition of his contributions to popular culture as a singer and songwriter and his accomplishments as a playwright and producer.

“He [Patrick Victor] has played a leading role in spreading respect for Seychelles music and who culture across the Indian Ocean region, leading to the increased popularity and recognition of both Mr. Victor and his fellow Seychellois musicians outside Seychelles,” reads the statement.

The other recipient of UniSey’s first honorary degree, Bernard Elizabeth, was chosen for his contribution to civil society and voluntarism. In its statement, UniSey said Elizabeth has had “great impact in the fields of counselling and scouting.”

Elizabeth has dedicated his award to non-governmental and civil society organisations in Seychelles.

Speaking to SNA on Friday, he described the recognition as “an acknowledgement of my contribution to the Seychelles economy and also the social development.”

He said that the award also serves as an acknowledgement of the leadership role discharged as chairperson of the Seychelles civil society organisation from 2006 to 2012, during which 94 non-governmental organisations were registered.

Elizabeth is also the Chief Scout of Seychelles and a former President of the Rotary Club of Victoria, Seychelles. He also currently coordinates the work of ‘Action Catholique du Mileux Independent,’ which is a Church-associated think tank on national issues.

According to UniSey, both Victor and Elizabeth were nominated by members of the public who submitted supporting materials on behalf of each candidate. Each submission was evaluated by the university’s ruling council, prior to the final selection of the two recipients.

It was last year that the university established criteria for the honorary degrees and invited members of the public to nominate Seychellois candidates who have made, and continue to make, significant and positive differences to the country’s social fabric.

The University of Seychelles said the awards, which are ‘strictly non-politicised’ this year recognise exceptional contributions made in the field of art, religion and community development.

“The intention of the University in making these prestigious awards is to encourage recognition of achievement across the broadest spectrum of activity, and it is hoped that the public will respond with enthusiasm when the call for nominations for next year's honorary degrees is made early in 2017.”

The University of Seychelles, established in 2009 as the first university of the island nation runs courses in collaboration with several international partner institutions.

Over 80 students who have completed their first bachelor’s and master’s degree courses in various fields, graduated as the class of 2016 earlier this week.

It was announced during the ceremony that the former president of Seychelles James Michel has agreed to continue as Chancellor of the University and that UniSey’s institute dedicated to the Blue Economy will in future become the James Michel Blue Economy Research Institute.

This is aimed at acknowledging the former president’s role in promoting interest -- nationally as well as internationally -- in the potential of the world’s oceans.