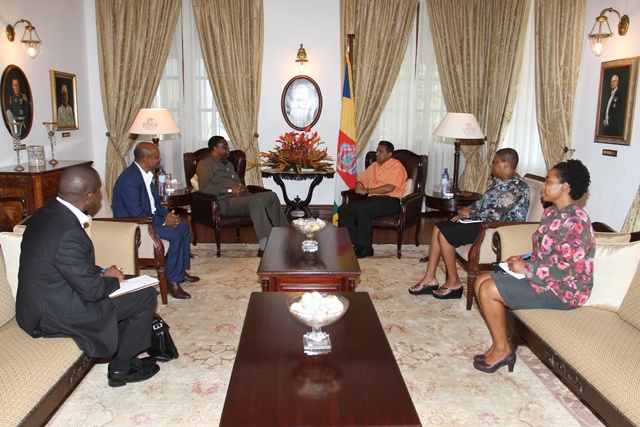 (Seychelles News Agency) - Enhancing energy infrastructure and assisting the private sector are the two main areas which the African Development Bank (AfDB) will be helping Seychelles, a top official of the bank said on Friday.

The newly-appointed Executive Director of the East Africa constituency, representing seven countries including Seychelles at the African Development Bank, Dr. Nyamajeje Calleb Weggoro, is on a working visit in the island nation. This is Weggoro’s first visit to Seychelles since his election to the post in July.

The visit is an opportunity for Weggoro and the relevant authorities, including government ministers, to discuss future projects.

“There are two major areas -- one is enhancing energy infrastructures ... but also assisting private sectors…in order to allow the private sector to participate fully in the economic development of Seychelles,” said Weggoro.

Weggoro, a Tanzanian national, spoke to journalists after meeting with the Seychelles President Danny Faure State House in the island nation’s capital, Victoria. He noted that discussions with the Seychellois head of state also focused on other potential areas of cooperation.

Weggoro also pointed out that he spoke to President Faure about skills development and capacity building.

“We also want to turn the bank into a knowledge-based institution other than just a lending institution just giving out resources, funding etc...We also want to assist countries in capacity building so that they have the people who can conceive, develop and implement projects efficiently,” he said.

Cooperation between the African Development Bank and Seychelles started in 1978. According to Weggoro, over the years the financial institution has provided assistance valued at around $134 million to Seychelles, a 115-island archipelago in the western Indian Ocean.

Weggoro said: “The current portfolio is about $44 million which is being used in different areas - in water, energy and also we are now preparing a human development plan.”

Weggoro said that he is on a mission to visit all of the countries in his constituency since he was elected in July. As the Executive Director at the African Development Bank for the East Africa constituency he also represents Rwanda, Uganda, Tanzania, Kenya, Ethiopia and Eritrea.