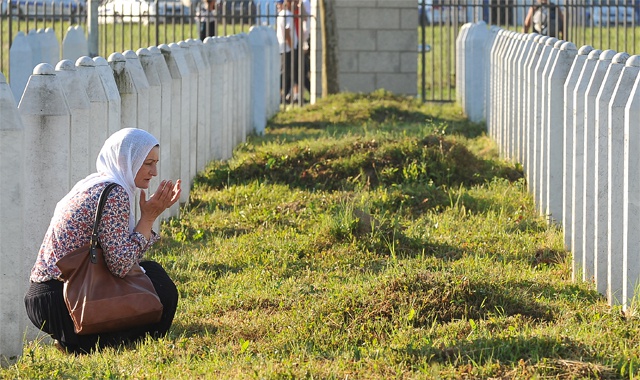 File Photo: A Bosnian Muslim woman, survivor of Srebrenica 1995 massacre, mourns near graves of her relatives, at the memorial cemetery in the village of Potocari, near Eastern-Bosnian town of Srebrenica, on July 11, 2016. (ELVIS BARUKCIC/AFP)

The eight will face a war crimes court in Belgrade on charges of ordering or taking part in the slaughter of hundreds of Muslims near Srebrenica.

The bloodbath unfolded over just one day in a warehouse in the town of Kravica.

It was part of a string of mass killings in the east Bosnian enclave by Bosnian Serb forces commanded by General Ratko Mladic, currently on trial in The Hague.

It is the first time Serbia will try suspects involved in the Srebrenica massacre.

Carried out by ethnic Serbs, the episode has long been a highly sensitive matter in Serbia, which was gripped by virulent nationalism and demands to protect Serbian minorities as Yugoslavia broke up.

If found guilty, the eight face up to 20 years in jail.

"This is a very important case as Serbia needs to face its past," Serbia's former war crimes prosecutor Vladimir Vukcevic told AFP.

"Without that there can be no catharsis, no reconciliation in the region."

The Srebrenica massacre was ruled as genocide by two international courts although Serbia has persistently rejected the definition.

The eight are suspected members of the Bosnian Serb "Jahorina" special police unit, a dozen of whose members have already been sentenced in Bosnia over the Kravica killings. All the defendants obtained Serbian citizenship after the war.

One of those charged was the unit's commander, 58-year old Nedeljko Milidragovic, or "Nedjo the Butcher."

He is accused of having ordered the executions and saying "nobody should get out alive", according to the indictment.

After the war, Milidragovic became a successful businessman in Serbia, local media reported at the time of his arrest.

Some 8,000 Muslim men and boys were killed and their bodies dumped in mass graves during the massacre, which became a symbol of the horror of the 1990s Balkan wars that accompanied Yugoslavia's collapse.

The Kravica victims were caught as they fled through a forest.

Bosnian Serb police and the military packed the prisoners into the warehouse and began shooting and throwing grenades, according to the prosecutor and previous court hearings.

Their remains have been found in at least eight mass graves, according to the prosecutor.

Previous prosecutions linked to the Srebrenica massacre have been held by the Bosnian authorities and The Hague-based International Criminal Tribunal for the former Yugoslavia (ICTY).

Mladic awaits the ICTY's verdict over his role in war crimes committed during the Bosnian war, including for Srebrenica.

In closing arguments last week, ICTY prosecutors called on the judges to jail Mladic for life, while his defence said he should be acquitted as he had denied all the charges during the four-year trial.

Bosnian Serb wartime political leader Radovan Karadzic was sentenced by the ICTY in March to a 40-year jail term, being found guilty for various war crimes committed during the war, including Srebrenica.

At least four more people have been under investigation for the Srebrenica massacre, according to Vukcevic, who led the investigation and brought charges against the eight.

In an address to the UN Security Council last week, Brammertz also slammed Serbia for continuing "to ignore and breach its legal obligations to cooperate with the Tribunal," by refusing to extradite three of its nationals for trial on witness intimidation charges.