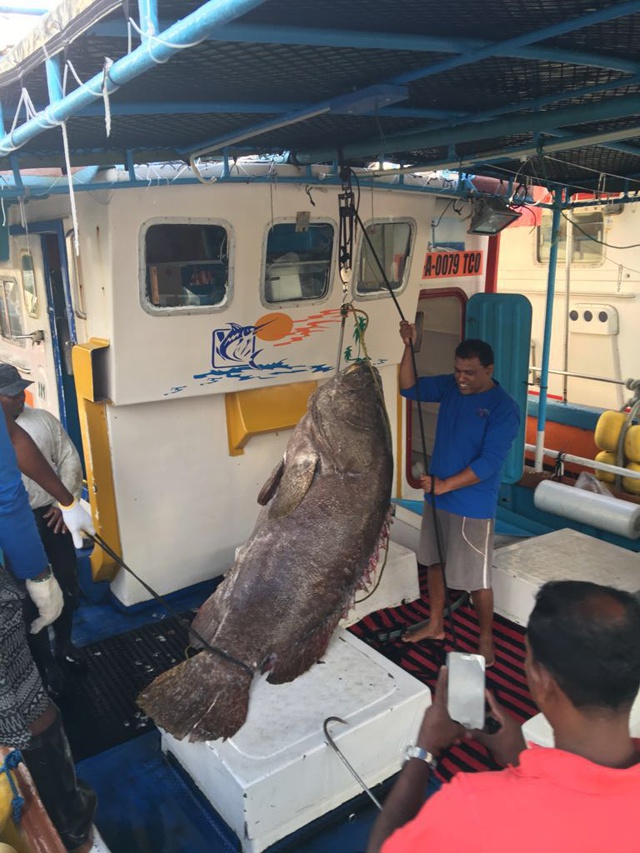 The five-member crew vessel, Marlu 1, was astonished by the catch that happened at about 80 miles off the shore of Mahe, the main island of the archipelago in the western Indian Ocean. Tuna is the main targeted species of the vessel.

“When this thing landed on the vessel, everyone was very surprised because it was unexpected, especially when they were fishing for tuna,” said Muditha Gunatilake, the owner of Marlu 1 told SNA via email.

Gunatilake added that the crew "were very surprised because this boat has been fishing for over 1 and a half years. It is typically for tuna, and due to the style and nature of the fishing we have never caught anything apart from tuna.”

The 210-centimetre fish was unloaded and sold to a Seychellois company, Sea Harvest, which specialises in handling fish and fishery products. The company also exports seafood to the European, Asian and Middle East markets.

Speaking to SNA, the managing director of Sea Harvest said the giant Grouper was sold and exported to Fresco Fisheries, a British distributor, rather than sell it on the local market.

“I don't know anybody who would have bought it as we had plenty of stock in our two [fresh fish retail] shops. I happened to mention it to our UK distributor, and he was quite keen to try to sell the fish,” said Bentley.

Bentley said the Sea Harvest Company would not have been able to sell the fish whole on the local market.

“There is no way they could have taken it. We would have sold it as fillet or portions, and that would have been about 40 percent of the weight.”

After being processed, the fish weighted 192kg and for it to be flown to the UK. Bentley said: "We had to make a special box for this fish to fly in due to its size.”

The giant Grouper was flown to the UK by the national carrier Air Seychelles and Etihad.

The giant Grouper caught the attention of news reporters in the UK when the fish went on display at Manchester’s Arndale market.

According to the Dailymail, the Grouper “is the third-largest fish of its kind on record to be caught anywhere in the world.”

The newspaper added that “the huge exotic fish will be cut up into meat worth more than £5,000.”

“Since 2009 when I started with Sea Harvest, I have probably only seen three or four maybe five of these Grouper caught from the longliners. It is somewhat of a rarity,” said Bentley.

Britain to US, Europe: 'Go further' to counter Russia