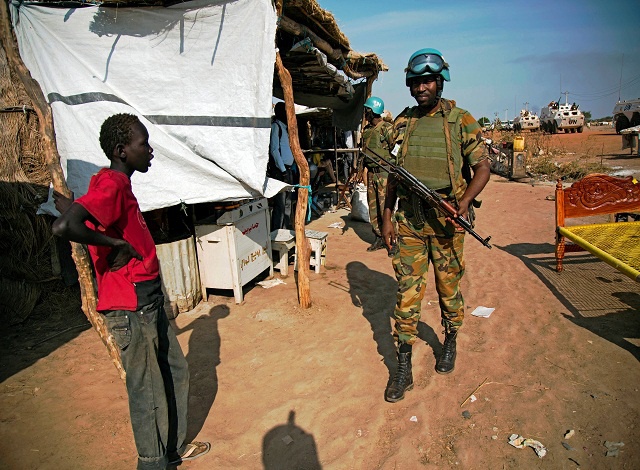 Peacekeeper troops from Ethiopia and deployed in the UN Interim Security Force for Abyei (UNISFA) patrol outside Abyei town, in Abyei state, on December 14, 2016. The Abyei Administrative Area is a disputed territory between Sudan and South Sudan with longstanding intercommunal tensions between the Ngok-Dinka ethnic majority and the pastoral Misseriya population, who migrate through the area seasonally from the north. An attack by Government of Sudan forces on Abyei in May 2011 displaced the majority of the Ngok Dinka population, approximately 105,000 people to areas south of the River Kiir, which became overcrowded and are suffering a huge competition over natural resources. (ALBERT GONZALEZ FARRAN / AFP)

(AFP) - The UN Security Council on Friday extended the mandate of its peacekeeping mission in South Sudan for a year, demanding an end to the fighting as the war entered its fourth year.

After days of tough negotiations, the council unanimously adopted a US-drafted resolution that extends the mandate of the 14,000-strong UNMISS force to December 2017.

According to the measure, the mission will include a new regional force of 4,000 troops, which the council decided to deploy in August but has yet to hit the ground.

The resolution threatens sanctions against those who undermine South Sudan's stability and warns that the council will consider "appropriate measures" including an arms embargo "to address the evolving situation."

US Ambassador Samantha Power described the measure as an "upgrade" of the UNMISS mission, which has come under criticism for failing to protect civilians during the three-year war.

Russia, China, Venezuela and the three African countries on the council have balked at Washington's handling of the crisis in South Sudan. They oppose an arms embargo and sanctions.

UN Secretary General Ban Ki-moon harshly criticized South Sudan's leaders ahead of the vote, saying they had "betrayed their people's trust and squandered a peace agreement."

"Tens of thousands lie dead," he added before urging the council to take stronger action "including through punitive measures."

Ban warned last month that South Sudan faces a "very real risk of mass atrocities" and that peacekeepers would be powerless to stop such a bloodbath.

A recent report criticized the peacekeepers for failing to protect civilians, including women who were raped by government soldiers during heavy fighting in July not far from the gates of a UN compound in Juba.

The country won independence from Sudan in 2011 with strong support from the United States.

Africa » Be a reporter: Write and send your article » Subscribe for news alert
Tags: SSudan, conflict, UN, US, peacekeeping