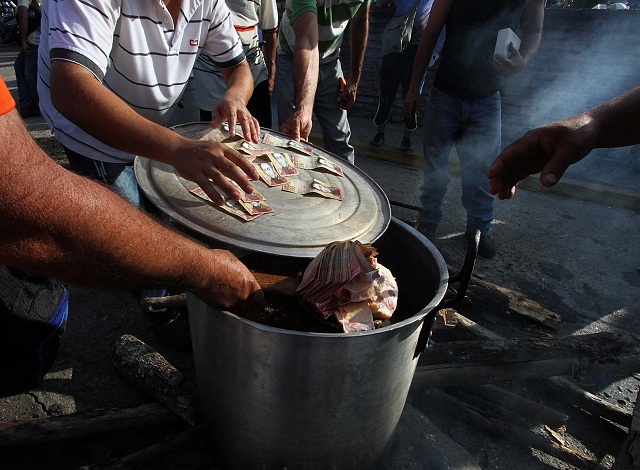 People protest on the "Troncal 5" road over the lack of cash as the new bank notes have not appeared, in San Cristobal, in Venzuela's Tachira state, on December 16, 2016. Venezuelans lined up to deposit 100-unit banknotes before they turned worthless, but replacement bills had yet to arrive, increasing the cash chaos in the country with the world's highest inflation. Venezuelans are stuck in currency limbo after President Nicolas Maduro ordered the 100-bolivar note -- the largest denomination, currently worth about three US cents -- removed from circulation in 72 hours. (GEORGE CASTELLANOS / AFP)

The government had briefly pulled from circulation the largest-denomination 100-bolivar bill without replacing it on Thursday, due to the delay.

People around the country took to the streets protesting, there was widespread looting in the south and the government boosted the number of troops on the streets.

Bolivar Governor Francisco Rangel Gomez said one person had died and 262 people were detained in his state, where 3,200 soldiers were deployed to "restore order."

The (100-bolivar) bill is worth about 15 US cents at the highest official rate, and until recently accounted for 77 percent of the cash in circulation in Venezuela.

Venezuela has the world's highest inflation rate. The government is trying to introduce new bills in much higher denominations since most people have to carry around bags full of cash for everyday transactions.

Khan said this first shipment would be followed by two more, adding up to 60 million units of the 500-bolivar bill.

Denominations of up to 20,000 bolivares are expected to follow.

Maduro blamed the delay on "US Treasury Department sabotage." The bills were made in Sweden.

Maduro, a former bus driver, has presided over an unraveling of Venezuela's oil-rich economy as crude prices have plunged. He and predecessor Hugo Chavez have made the economy increasingly state-led.

Maduro's government also blames speculators for hoarding the 100-bolivar bill. The country's borders with Brazil and Colombia have been shut until January 2 in a bid to boost security and put a dent in black marketeering.

On Sunday, angry locals could be seen waiting to get through, many shouting at troops in riot gear. Many locals also rely on cross-border trade for their livelihoods.

Analysts have warned there is a risk of unrest in Venezuela, which Human Rights Watch says is in the grips of a "humanitarian crisis." Anti-government protests in 2014 led to clashes that left 43 people dead.