China chokes under heavy smog with worse ahead 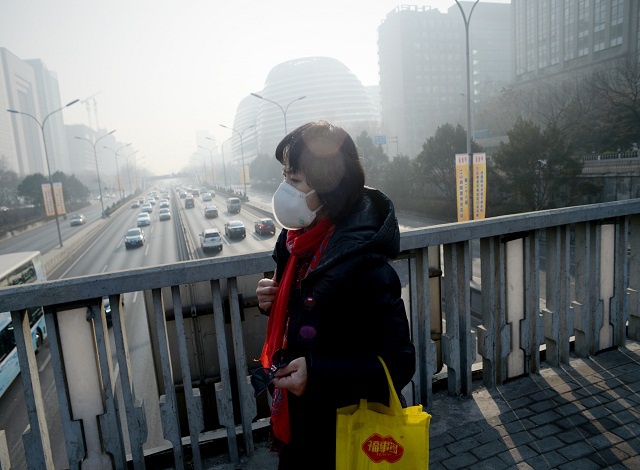 A woman wearing a mask walks across an overpass in Beijing on December 19, 2016. Hospital visits spiked, roads were closed and flights cancelled on December 19 as China choked under a vast cloud of toxic smog, with forecasters warning the worse was yet to come. (WANG ZHAO / AFP)

(AFP) - Hospital visits spiked, roads were closed and flights cancelled Monday as China choked under a vast cloud of toxic smog, with forecasters warning the worse was yet to come.

At least 23 cities in the world's most populous country have issued red alerts for air pollution since Friday, according to the official Xinhua news agency.

A host of emergency measures have been implemented to protect the public's health from the smog, which is smothering almost a ninth of the entire country.

On Monday morning -- the fourth day of the alert which is scheduled to end on Wednesday -- Beijing's air quality was better than feared, with PM 2.5 levels hovering around 200, according to data maintained by the US Embassy.

And the relatively low number was just a temporary reprieve, Beijing's meteorological authority told AFP, adding that the worst haze would hit the city Monday night and linger until Tuesday.

In neighbouring Shijiazhuang, the capital of Hebei province, PM 2.5 levels stood as high as 701 at noon, with levels of larger PM 10 particles even higher.

In the port city of Tianjin, where readings for PM 2.5 climbed over 400 early in the morning, more than 180 flights had been cancelled and around 60 delayed since the alert began, according to national broadcaster CCTV.

Highways in the city were also closed, it said.

Several large hospitals in Tianjin saw a surge in the number of patients with respiratory diseases like asthma, according to the People's Daily.

A red alert, issued when severe smog is expected to last more than 72 hours, is the highest of Beijing's four-tiered, colour-coded warning system.

The capital issued its first ever red alert last year in December since the adoption of an emergency response programme for air pollution in 2013, despite frequent bouts of serious smog.

Most of China's smog is blamed on the burning of coal for electricity and heating, which spikes when demand peaks in winter.

The issue is a source of enduring public anger in China, where fast economic growth in recent decades has come at the cost of widespread environmental degradation.