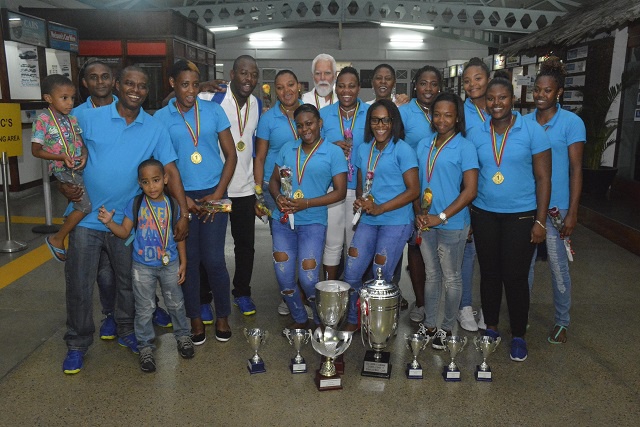 (Seychelles News Agency) - After coaching the ARSU ladies team to a gold medal at the African Zone 7 championship earlier this month, Julien Onezime is taking up a new challenge for 2017.

The Seychelles Volleyball Federation has appointed Onezime as the coach of the Seychelles ladies’ national selection for the second time.

Onezime told SNA on Monday that the appointment is another challenge and another chance of winning another medal for Seychelles, a group of 115 islands in the western Indian Ocean.

“For me, it’s another serious task. I was national team coach in 2010 and 2011 and the team won a gold medal. So it’s another challenge for me to bring in another gold medal,” said Onezime.

The 2011 medal came at the Indian Ocean Island Games in Reunion, a French department.

Onezime has successfully led ARSU, a ladies team from Anse Royale, in the south of the main island Mahe, to winning local league and cup titles, as well as seven out of the ten times they won the Zone 7 clubs championship organised by the African Volleyball Confederation (CAVB).

ARSU’s players are encouraging him to take up the challenge as national team coach said Onezime.

“I’ve been with ARSU for a while now and the players themselves are pushing me to take up the challenge because they see I can do it especially with the level of discipline that I have,” Onezime told SNA.

Onezime added that the new post will not be tougher than coaching but rather a continuation of what he was doing with but with new elements.

On the men’s side, the new national team coach is James Camille who has been coaching since 1989.

Camille told SNA he is ready to take up the challenge once more but will relook at the selection of players.

“Most of the players I knew back then are almost of retiring age now, so I will start looking at the younger talent that we have,” said Camille.

Camille said he wants to bring the national selection back to the level that helped them won the gold medal in 2011.

“It’s not going to be an easy task but I am up to it and I will work to have a well prepared team for the next competition,” Camille told SNA.

Both coaches are to announce their pre-selection list of players by next week.