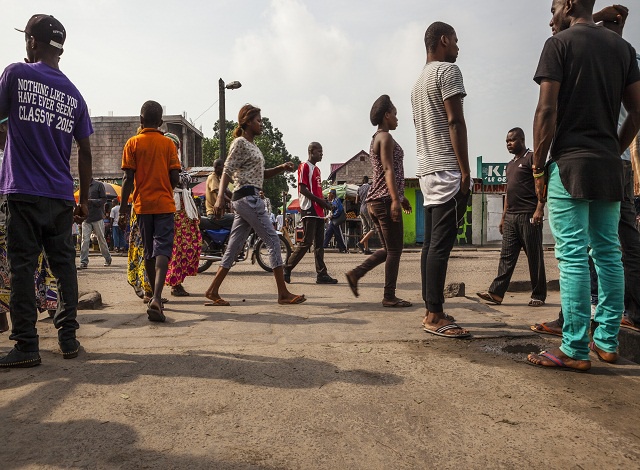 People walk on a street of the Mombele neighborhood in Kinshasa on December 19, 2016, as tensions rose with one day left of Congolese President's mandate. Joseph Kabila's second term ends on December 20 but he has shown no sign of stepping down and mediation talks have failed, sparking fears of fresh political violence in the mineral-rich but unstable Democratic Republic of Congo.(Eduardo SOTERAS / AFP)

(AFP) - Gunfire erupted in several parts of Kinshasa early Tuesday as Congo's long-serving President Joseph Kabila appeared set to stay on despite the expiry of his mandate and announced a new government.

Shots rang out in several parts of the sprawling city of 10 million, especially in two northern quarters after whistles -- an opposition sign of protest -- were heard in several areas.

Demonstrators blew whistles and beat on improvised drums, their gesture for a red card, asking the 45-year-old who has led the Democratic Republic of Congo since 2001 to quit the top job.

State television overnight announced the formation of a new government following an agreement between Kabila's administration and a fringe opposition group.

The new cabinet will be led by Sami Badibanga, a defector from the party of the mainstream opposition party led by 84-year-old Etienne Tshisekedi.

A muffled explosion was also heard in the posh quarter of Gombe, where the presidential palace is located. Residents said tear gas shells were fired in other areas but it was unclear who was behind the shooting.

Talks on a peaceful transition are in limbo, sparking fears of fresh violence in the unstable mineral-rich nation.

Kinshasa was a shadow of itself Monday with barely any traffic on the main roads, public transport at a minimum, and soldiers and police outnumbering passers-by.

Shops were shuttered in the main square and there were tense scenes at Kinshasa University, where dozens of police and troops held back hundreds of angry students.

The UN rights office in Congo said 28 people were arrested in Kinshasa on Monday and 46 in the eastern cities of Goma and Bukavu.

In the volatile east, nine rebels, a South African peacekeeper, a Congolese soldier, a police officer and a civilian were killed when militia fighters attacked several buildings in Butembo, including the prison.

A supplier of minerals crucial for everyday items ranging from smartphones to lightbulbs -- tantalum, tungsten, tin and coltan -- the mineral trade in the east of the country has long been linked to armed groups and conflict.

Kabila, who has been in power for 15 years, is constitutionally barred from seeking a third term but under a recent constitutional court order, he may stay on until a successor is chosen.

The ruling party and some opposition leaders have agreed to schedule an election in April 2018 at the earliest, leaving Kabila in office until the vote. But the main opposition bloc rejects this plan.

In Kinshasa, security forces cordoned off the university but students reached by telephone said they had been planning "to march peacefully" to parliament to demand Kabila step down.

An AFP video journalist and a fixer -- both Congolese -- were arrested at the university and detained for 10 hours before being released late on Monday.

They were questioned by officials from several services and they went through the contents of the video reporter's phone.

Security was also tight in the second city, Lubumbashi, in the southeast, with most shops closed and very little traffic on the roads.

Social networks have been cut or filtered since midnight Sunday on government orders and police at the weekend banned gatherings of more than 10 people.

In a last-ditch bid to achieve a peaceful transfer of power, the ruling party and fringe opposition groups held talks last week with the mainstream opposition led by Tshisekedi.

But after a week of mediation, they were suspended and due to resume on Wednesday.

A democratic handover would break new ground for Congo's 70 million people who since independence from Belgium in 1960 have never witnessed a democratic transfer of power following polls.

The president has been in office since his father Laurent Kabila was assassinated in 2001. He was elected in 2006, and again in 2011, in a poll the opposition decried as rigged.

Tshisekedi's opposition grouping has threatened to bring people onto the streets from Monday if the talks failed.

Some two decades ago, Congo sunk into the deadliest conflict in modern African history, its two wars in the late 1990s and early 2000s dragging in at least six African armies and leaving more than three million dead.

Africa » Be a reporter: Write and send your article » Subscribe for news alert
Tags: Congo

DR Congo goes to the polls after troubled odyssey