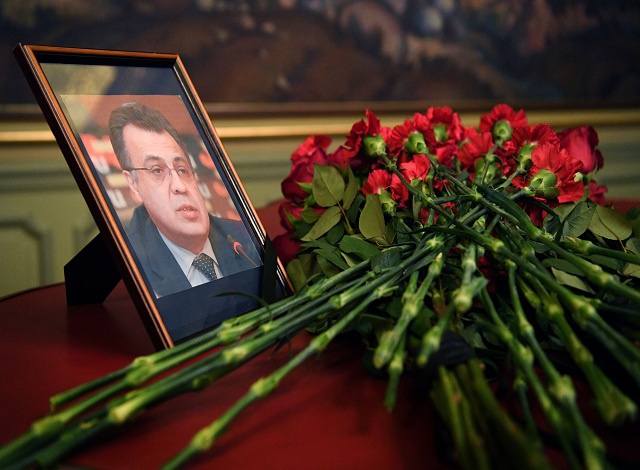 Flowers are placed in front of a portrait of Russian Ambassador to Turkey Andrey Karlov in the Foreign Ministry in Moscow on December 20, 2016, a day after the assassination of the Russian ambassador in the Turkish capital. A Turkish policeman crying "Aleppo" and "Allahu Akbar" shot dead Russia's ambassador to Turkey in Ankara on December 19, prompting a vow from President Vladimir Putin to step up the fight against "terrorism." (Natalia KOLESNIKOVA / AFP)

(AFP) - Russian media on Tuesday reacted with outrage to the killing of the country's ambassador to Turkey but said it was unlikely to derail warming ties between Moscow and Ankara.

Ambassador Andrei Karlov, 62, was gunned down Monday at the opening of a Russian photography exhibition in Ankara by a Turkish policeman crying "Aleppo" and "Allahu Akbar" (God is greatest), in what Moscow called a "terrorist act".

"The murderer was afraid to look him in the eye," ran the banner frontpage headline on pro-Kremlin paper Izvestiya above a dramatic picture of Karlov with his killer looming behind.

"They did not shoot at Karlov. They shot at Russia," Senator Konstantin Kosachev said in comments published alongside.

Both Russian leader Vladimir Putin and his Turkish counterpart Recep Tayyip Erdogan called the attack a "provocation" aimed at sabotaging ties that have been patched up since a furious dispute over Ankara's downing of a Russian jet in Syria in November 2015.

Putin also said that the killing in Ankara was designed to undermine efforts to find a settlement on the conflict in Syria that are currently being spearheaded by Russia and Turkey.

Moscow and Ankara are on different sides of the conflict in Syria but the two countries have worked closely together to evacuate citizens from the battered city of Aleppo.

The foreign and defence ministers from Russia, Turkey and Iran are set to meet Tuesday in Moscow for key talks on Syria

"I don't think that Moscow will provoke conflict" over the incident, Leonid Isayev of Moscow's Higher School of Economics told RBK business daily.

"Today dialogue between Russia and Turkey is developing quite actively."

In an interview with Izvestiya, the head of Russia's parliamentary committee on foreign affairs, Leonid Slutsky, warned those who try to drive a wedge between Russia and Turkey would fail.

"The main thing is that there will not be a new round of tensions between Russia and Turkey, no matter how much our opponents want this," he said.

"This was a terrible tragedy, but interstate relations overall will not suffer from this."

Other outlets were, however, harsher toward Ankara -- which state television had portrayed as Russia's top foe in the wake of the jet's downing -- pointing out that Turkish authorities had been unable to protect the Russian envoy.

"Responsibility for the death of a foreign ambassador on its territory always lies with the host country," Moskovsky Komsomolets tabloid wrote, adding that the murder was "yet another powerful blow" to the reputation of Turkish President Recep Tayyip Erdogan.