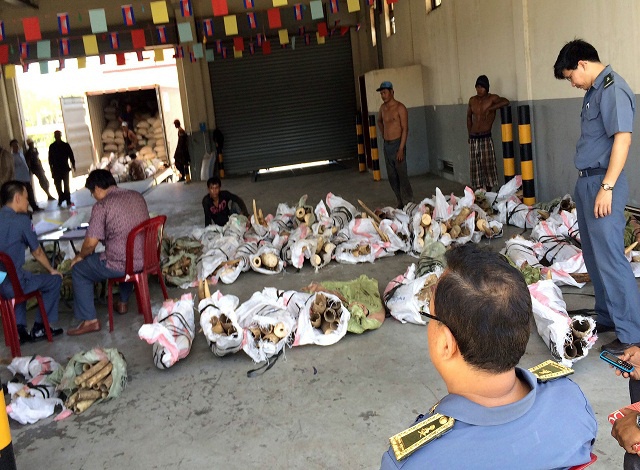 Cambodian customs officials are pictured with a haul of seized ivory at a port of Sihanoukville on May 9, 2014. (AFP PHOTO/STR)

(AFP) - Cambodian officials have seized 1.5 tonnes of illegal ivory and animal parts hidden in a timber shipment from Mozambique that was destined for China, a wildlife charity and an official said on Thursday.

The huge haul -- one of the largest seizures in Cambodia this year -- highlights the Southeast Asian nation's key role in a lucrative and ecologically disastrous illegal wildlife trade primarily fuelled by Chinese demand.

According to Wildlife Alliance, a Cambodia-based conservation group which helps authorities track smugglers, customs officials made the bust while searching some shipping containers last Friday on the outskirts of Phnom Penh.

"This is a huge case with too many dead elephants. We should be seeking justice for these animals," Kdov Nuch, customs director at Kandal dry port where the interception was conducted, said in the statement.

The shipping company on the manifest was the same one involved in a bust in Vietnam in late October in which nearly a tonne of ivory was discovered.

Wildlife Alliance said the chief suspect is a Vietnamese national at large who is known for being a key smuggler, but did not name the individual.

Un Vannarith, deputy chief of the Phnom Penh forestry administration cantonment, confirmed the seizure to AFP, but declined to elaborate any further.

Demand for animal parts, especially in China and Vietnam, has decimated the populations of many rare species and is a major scourge for Africa's already pressured elephants and rhinos.

The reclusive pangolin has become the most trafficked mammal on Earth due to soaring demand in Asia for their scales for traditional medicine and their flesh, considered a delicacy.

The scales -- like rhino horn -- are nothing more than keratin, the same substance that makes up finger nails. Yet both are falsely touted as a cure for multiple ailments, including cancer, among some practitioners of traditional Chinese medicine.

Ivory, a substance which is banned for trading globally, is prized for its beauty.

Conservationists have voiced concern that Cambodia, an impoverished nation where rule of law is weak, has emerged as a key transit route for African ivory in recent years.