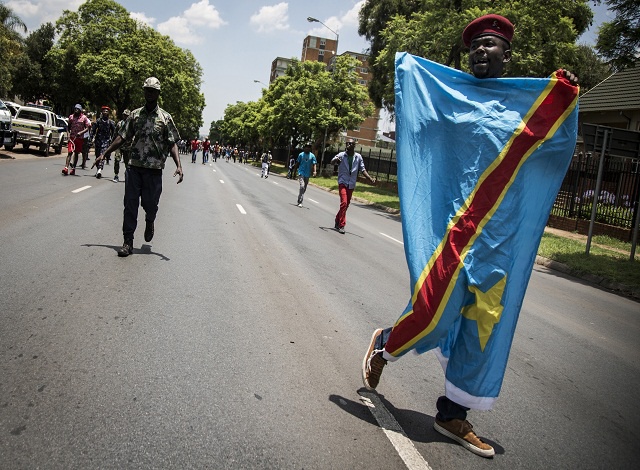 Congolese protesters arrive outside the embassy of the Democratic Republic of the Congo in defiance against the President of the Democratic Republic of the Congo, Joseph Kabila, at a protest demanding him to step down on December 20, 2016 in Pretoria. The United Nations voiced alarm over a wave of arrests in the Democratic Republic of Congo, where tensions were running high after President Joseph Kabila's term in office expired. Tuesday marked the end of the second and constitutionally-mandated final term for the 45-year-old, who inherited the presidency after the 2001 assassination of his father. But he is now refusing to leave the job that he began without much fanfare. (John Wessels / AFP)

(AFP) - Hopes rose Thursday for a deal aimed at ending a dangerous crisis in the Democratic Republic of Congo, according to a source with the Catholic church, which is overseeing the talks in the capital Kinshasa.

"We are going to wrap up tonight," the source said.

The talks are being presided by the Congo National Episcopal Conference, CENCO, which has previously urged a conclusion by Christmas.

"The agreement has to be signed tomorrow because the bishops have to be in their dioceses by Saturday at the latest," the source said, referring to Christmas Eve.

The central African country of 70 million people has been thrust into a potentially explosive crisis over the future of President Joseph Kabila.

Kabila, 45, has been been in office since his father Laurent Kabila was assassinated in 2001.

In November, he cut a power-sharing deal, appointing fringe opposition politician Samy Badibanga as prime minister -- a move that would effectively extend his term to at least late 2017.

A working document being used at the talks, seen by AFP, sets out a plan for a "political transition" and the holding of presidential elections -- which should have been held this year -- in "late 2017."

A so-called national transition council would be set up to ensure the agreement is carried out.

Vast and resource-rich but poor and chronically unstable, DR Congo has never witnessed a democratic transfer of power following polls since independence from Belgium in 1960.

Two decades ago, the country collapsed into the deadliest conflict in modern African history.

Its two wars in the late 1990s and early 2000s dragged in at least six African armies and left more than three million dead. Its restive east remains a battleground for rival ethnic militia.

The deadline for Kabila's official departure from office unleashed clashes that have left between 56 and 104 people dead, according to divergent tolls.

Those figures do not include an attack that took place Tuesday in the central town of Kananga, for which the toll remains unclear.