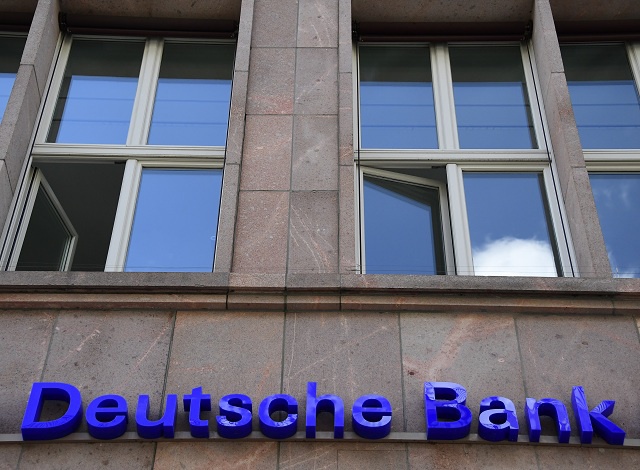 The logo of Germany's biggest lender Deutsche Bank is seen on a branch of the bank in Berlin's Mitte district on September 30, 2016. Shares in Deutsche Bank plummeted on the Frankfurt stock market, dragging other European banks and global markets down with it, after reports some customers were pulling money out.
(TOBIAS SCHWARZ / AFP)

(AFP) - Deutsche Bank and Credit Suisse said Friday they had agreed with US authorities to pay billions of dollars to settle a probe into their roles in the subprime mortgage crisis.

The German lender will pay a total of $7.2 billion -- a $3.1-billion fine and $4.1 billion in relief to consumers, as part of the long-sought agreement in principle with US authorities, it said.

Shares in the German banking giant surged on the Frankfurt stock exchange on the heels of the announcement, which analysts said was a good outcome for now.

In September, the US Department of Justice had sought a $14-billion fine from Deutsche Bank, sparking fears it might have to raise fresh capital.

Hours after the announcement Friday, Credit Suisse, said it too had struck an agreement with US authorities to pay almost $5.3 billion to settle disputes over the sale of mortgage-backed securities.

Both come a day after the DoJ sued British financial giant Barclays, accusing the bank of massive fraud in the sale of toxic mortgage-backed securities, which contributed to the 2008 global financial crisis.

Deutsche Bank's chief executive John Cryan had always insisted that the German lender would pay less than the initial US demand.

And the bank brushed off fears the consumer relief element would have a significant impact on its results.

"The financial consequences, if any, of the consumer relief are subject to the final terms of the settlement, and are not currently expected to have a material impact on 2016 financial results," the bank said.

Deutsche Bank's share price plummeted in late September on news of the US fine demand to historic lows of 9.90 euros.

Investors feared their stakes would be diluted if the lender -- already struggling with a painful restructuring and a morass of legal entanglements around the world -- was forced to raise fresh capital to cover the fine.

"Although today's settlement is not the end of the route, it has been a good short-term relief for investors, given that Deutsche Bank needn't raise capital to cover for legal charges in the immediate future," said analyst Ipek Ozkardeskaya, of London Capital Group, in a note to clients.

The bank will publish preliminary 2016 results on February 2.

However, the settlement does not resolve probes into whether the bank manipulated foreign-currency rates and precious metals prices, and allegations it facilitated transactions that helped investors illegally transfer billions of dollars out of Russia.

Deutsche also faces civil lawsuits related to claims that its traders manipulated key interbank interest rates. It remains unclear how much it will cost the bank to wrap up these cases.

It has already paid more than $9 billion in fines and legal settlements worldwide since the start of 2008, according to Bloomberg News data.

Barclays, Deutsche Bank and Credit Suisse were among several major banks implicated in the global financial crisis, along with Royal Bank of Scotland.

Also on Friday, Credit Suisse said it had reached an agreement with US authorities to pay almost $5.3 billion to settle disputes over the sale of mortgage-backed securities.

"Under the terms of the settlement, Credit Suisse would pay to the DoJ (US Department of Justice) a civil monetary penalty of $2.48 billion," the Swiss banking giant said in a statement.

"In addition, Credit Suisse would provide consumer relief totaling $2.8 billion over the course of five years post settlement," it said, adding it still needed approval by the bank's board.

But Thursday's US move to sue Barclays -- which rejects the allegations -- in open court stood out, with the DoJ choosing not to seek a mutually acceptable resolution, as it has in most cases when taking enforcement action against major financial institutions.

The outgoing US administration of President Barack Obama is also working to complete investigations of Wall Street firms for creating and selling the subprime mortgage bonds that fuelled the 2008 financial crisis.

Authorities have already taken more than $46 billion in fines from six US financial institutions over their dealings in mortgage-backed securities.

General » Be a reporter: Write and send your article » Subscribe for news alert
Tags: Germany, US, Switzerland, banking, Deutsche, CreditSuisse