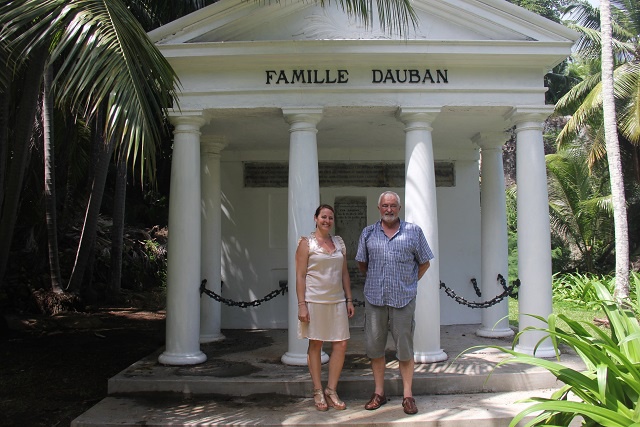 Marjolaine and Pierre Roche at the Dauban Family Mausoleum which contains the remains of Auguste Dauban, his wife Catherine and their first child Eva who died when she was just two and a half years old. (Seychelles News Agency)

(Seychelles News Agency) - French national Marjolaine Roche was in Seychelles this month to learn more about her ancestors and visit the place where her great-great grandfather and great-grandmother lived.

Roche, 40, is originally from Cadenet, Vaucluse in southeastern France, and learned at a young age from stories told by her grandparents that she was the descendant of the renowned Dauban family of Silhouette, from her mother’s side.

“I remember when I was five, there were some artifacts in the house such as tortoises, a crocodile skin, coco-de-mer nuts and lots of shells, which my grandparents told me were from Seychelles,” said Roche.

Roche, who currently resides in Reunion, a French department in the Indian Ocean, visited Seychelles for the first time 10 years ago and met her cousin Thomas Dauban, the son of the late Henri Dauban.

This time around Roche brought her father, Pierre Roche, who is celebrating his 70th birthday.

Last Wednesday, Roche and her father visited Silhouette and some sites linked to the family history, including the 19th-century plantation house known locally as Grann Kaz, built by the Dauban family after they purchased the entire island in 1867.

Silhouette is the third-largest island in the Seychelles archipelago in the western Indian Ocean and was owned by the Dauban family from 1860 to 1960.

Roche also visited the mausoleum where some family members were laid to rest and a museum located on the first floor of the house, which explains some of Dauban’s family history and gives an insight into the island.

On display are materials including biographies of the family members – from Napoleon’s Colonel Joseph Francois Dauban to his son Auguste whose business ventures were so extensive he earned the nickname the ‘Rothschild of the Indian Ocean.’ The biography of Henri Dauban, the man who was a javelin thrower for the United Kingdom in the 1924 Olympic Games in Paris, France is also on display.

There are also letters, photographs and articles about the family, including one by Ian Fleming, the novelist known for inventing the popular character James Bond, who memorably dined with Henri Dauban.

Roche who was visiting Silhouette for the second time said this time around she has a better understanding of the family’s history.

“In the beginning, I did not really understand the lineage but based on the family tree researched by genealogist, Xavier Rony, I could actually see all the links, and that is when I learned that my great-grandmother was born on Silhouette, and was, therefore, Seychellois,” she said.

For his part, Pierre Roche said the family will now try to collect as much information from Marjolaine’s grand-mother so as to learn about his daughter’s ancestry and keep the information for posterity.

After they bought the island in 1867 the Dauban family also established many plantation crops including breadfruit, coconuts and vanilla, which can still be seen growing today.

The family plantation house has today been restored to its former glory, serves as an authentic Creole restaurant of the Hilton Seychelles Labriz Resort & Spa, and museum.

The Dauban era came to an end when Henri Dauban sold Silhouette Island to a French group in 1960. The island was bought by the Seychelles' government in 1983.

Silhouette Island is one of the richest biodiversity hotspots in the western Indian Ocean with many endemic and threatened plant and animal species. Conservation on the island is managed by the local Island Conservation Society.