Crowds gather in Bethlehem ahead of Christmas mass 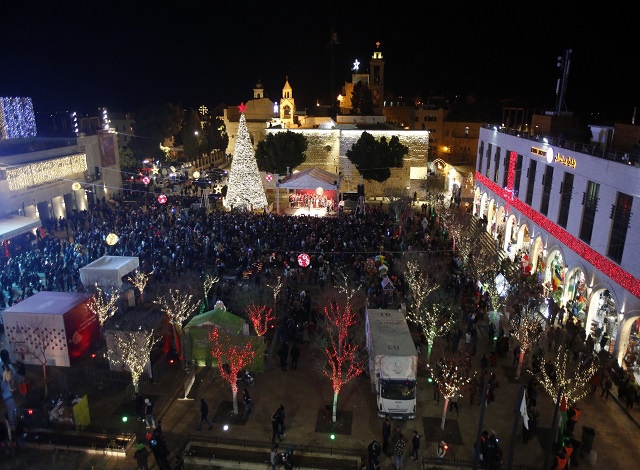 People take part in the Christmas Eve celebrations on December 24, 2016 at the Manger Square next to the Church of the Nativity, revered as the site of Jesus Christ's birth, in the biblical West Bank town of Bethlehem. Crowds gathered in Bethlehem for Christmas Eve celebrations ahead of midnight mass at the spot where Christians believe Jesus was born, with more visitors expected than in 2015 due to a drop in violence. (HAZEM BADER / AFP)

(AFP) - Crowds gathered in Bethlehem Saturday for Christmas Eve celebrations ahead of midnight mass at the spot where Christians believe Jesus was born, with more visitors expected than in 2015 due to a drop in violence.

Dozens of Palestinians and tourists flocked to Manger Square, near the Church of the Nativity, built over the spot where tradition says Mary gave birth to Jesus.

Some snapped selfies near the square's giant Christmas tree and watched the annual Scouts parade in the city, located a short drive from Jerusalem in the Israeli-occupied West Bank.

Palestinian security forces were deployed in areas leading up to the church and square, conducting searches of some people.

Christmas carols in Arabic rang out from speakers.

Archbishop Pierbattista Pizzaballa, apostolic administrator of the Latin Patriarch of Jerusalem and who will celebrate Bethlehem's midnight mass, later arrived to cheering crowds.

The Latin Patriarchate of Jerusalem heads the Roman Catholic Church in the Holy Land.

"It feels pretty awesome," said Valeria, a 21-year-old from the US state of Wisconsin.

"This is my first Christmas away from home... but this is really amazing to be in Bethlehem."

Ramzi Abu Khalil, who was wearing a red Santa hat, told AFP "this is Christ's land, the land of peace."

"We take pride in him. All Christians should come today to Bethlehem. This is a holy day for us and a day of pilgrimage."

Celebrations in Bethlehem culminate with midnight mass at the Church of the Nativity -- with the grotto where Jesus is believed to have been born underneath.

Some 2,500 tickets are usually given out for the mass and those wishing to attend must register in advance. Attendees usually include Palestinian officials and foreign dignitaries.

Beyond that, tens of thousands of tourists are expected to visit sites including Bethlehem, Jerusalem and Nazareth over the holidays, tourism officials say.

Israel's tourism ministry said some 120,000 visitors were expected in December, half of them Christians.

There is more optimism this year in Israel and the West Bank after a wave of violence and protests that erupted in October 2015 sharply reduced visits for Christmas.

Many of the Palestinian assailants were killed by Israeli forces while others were shot dead during clashes and protests.

The violence has greatly subsided in recent months, though tourists still have to cross Israel's West Bank separation barrier to reach Bethlehem.