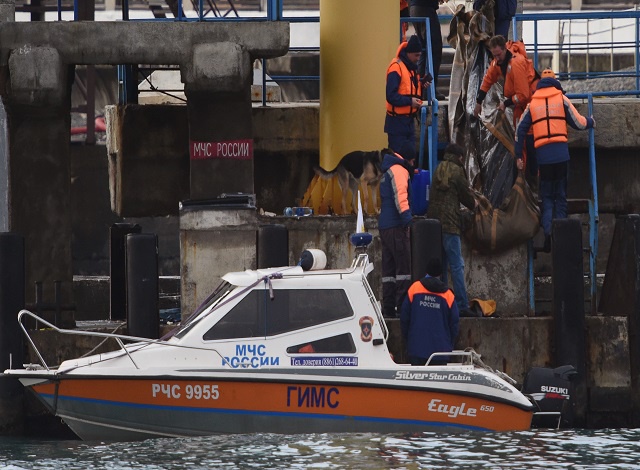 Russian rescuers pool their gear at Sochi the day after a Russian military plane crashed, on December 26, 2016. The Russian military plane crashed on its way to Syria on December 25, with no sign of survivors among the 92 onboard, who included dozens of Red Army Choir members heading to celebrate the New Year with troops. Russia's defence ministry said a body had been recovered from the Black Sea.(VASILY MAXIMOV / AFP)

(AFP) - Russian rescuers found Monday the first parts of the Syria-bound military plane that plunged into the Black Sea, as officials dismissed terrorism as a possible cause of the crash that killed all 92 people on board.

The Tu-154 jet, whose passengers included more than 60 members of the internationally-renowned Red Army Choir, was heading to Russia's military base in Syria when it went down off the coast of the resort city of Sochi shortly after take-off on Sunday.

Investigators have yet to confirm the cause of the crash, but officials said that an act of terror was not being considered as a possible explanation, despite the plane and its black boxes still being underwater.

A spokeswoman for the Sochi-based search and rescue branch of the emergency ministry confirmed that parts of the plane had been found underwater.

"The debris is at the depth of 27 metres one mile from shore," spokeswoman Rimma Chernova told AFP.

The Russian military added that divers had retrieved "two elements of the plane's control mechanism."

Later the defence ministry said part of the plane's fuselage, measuring 3.5 metres by 4.5 metres (11 feet by 15 feet), had been recovered and brought to shore Monday evening.

Authorities announced that the search operation would continue overnight and into the following days.

Russia's federal security service said it is looking into four suspected causes of the crash, which do not include terrorism.

"No signs or facts pointing to a possible act of terror have been received at this time," Russia's Federal Security Service said in a statement carried by national news agencies.

The probe is focusing on a pilot error, a technical fault, bad fuel and a foreign object in the engine as the four main scenarios, it added.

The military has cordoned off part of the Sochi shore, with soldiers standing in a chain and motor boats participating in the search regularly unloading at the pier, an AFP photographer reported.

More than 3,000 people are racing to find the remaining bodies and debris in a massive operation that includes 45 vessels, planes, helicopters and drones, along with divers and remotely-operated deepwater machines.

Transport Minister Maxim Sokolov said some of the bodies could have already been carried off by the "strong current" to Abkhazia, the separatist region of Georgia, and some of its own rescue workers have joined the search operation.

Along with the first 10 bodies, 86 body fragments were brought to the Russian capital for DNA analysis, defence ministry spokesman Igor Konashenkov said.

He said searchers have finished looking over the on-land territory around the crash site while divers are working over an area with a radius of 500 metres.

The Tu-154 jet went down on Sunday morning minutes after taking off at 5:25 am (0225 GMT) from Sochi's airport, where it had stopped to refuel after flying out from the Chkalovsky military aerodrome in the Moscow region.

Onboard were 64 members of the Alexandrov Ensemble -- the army's official musical group, also known as the Red Army Choir -- and their conductor Valery Khalilov.

"The ensemble has been orphaned by a third," said state channel Rossiya.

The choir was set to perform for Russian troops at the Hmeimim airbase in Syria, which has been used to launch air strikes in support of Moscow's ally President Bashar al-Assad.

"These people were flying to Syria to support and wish happy holidays to those who are serving their military duty there," Prime Minister Dmitry Medvedev said after opening a government meeting, which held a moment of silence.

Other passengers included military officers, journalists and popular charity worker Yelizaveta Glinka, also known as Doctor Liza, who had been flying with a cargo of medical supplies for a hospital in the coastal city of Latakia.

Another passenger was the head of the defence ministry's culture department Anton Gubankov, who worked to popularise the armed forces, including by authoring the song "Polite People" which honoured special forces officers who oversaw the annexation of Crimea.

President Vladimir Putin ordered a national day of mourning on Monday, with state television flashing black and white pictures of the victims across the screen while entertainment programmes were cancelled.

People brought flowers to improvised memorials at the port in central Sochi and the city's airport, as well as to the Moscow headquarters of the Red Army Choir and the office of Fair Aid, the NGO that Glinka headed, which primarily worked with Moscow's homeless.

"I know all of them. I cannot believe it, can't collect myself," said Vladimir Kuznetsov, a former member of the Alexandrov Ensemble who came to pay his respects.

"They knew us all over the world, we went everywhere," he said of the troupe, holding a candle in a plastic cup.

Tu-154 aircraft have been involved in a number of accidents in the past, including the April 2010 crash killing then-Polish president Lech Kaczynski and his delegation. They are no longer used by commercial airlines in Russia.