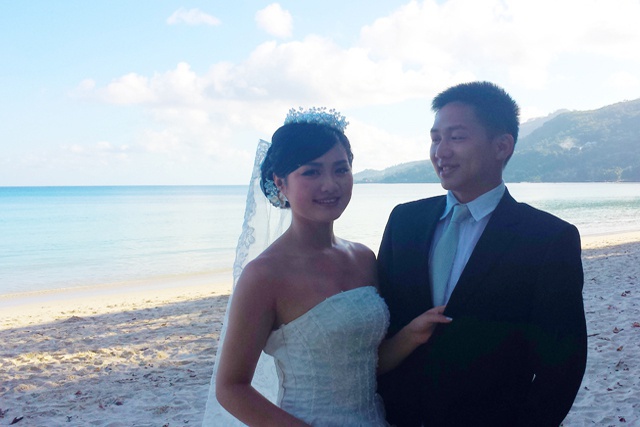 Chinese Couple pose for a photo at the Seychelles Beau Vallon Beach, China is currently in the Top 6 leading markets to the islands (Seychelles News Agency)

(Seychelles News Agency) - Figures released by the Seychelles National Bureau of Statistics in January showed that 230,272 tourists visited the archipelago in 2013. This was dubbed a record number of tourism arrival to the archipelago representing a 10.7 percent increase when compared to the previous year.

Almost half way through 2014 the Seychelles Tourism Board, STB, remains hopeful of at least maintaining the same figure at the end of this year considering present challenges especially with the significant decrease in tourism arrivals from the main European markets.

Overall visitor arrivals from Europe has decreased by 7 percent according to latest figures compared to the same period in 2013.

In spite of remaining the leading market, France has recorded a decrease of 14 percent in the number of visitors coming to Seychelles according to latest NBS figures.

The same trend is being observed in the Italian market.

The Seychelles Tourism authorities which is closely monitoring the situation have attributed the decrease to the effects of the recession in Europe which according to the Chief Executive of the Seychelles Tourism Board, Sherin Naiken, is impacting on visitor arrivals to the Indian Ocean region.

“Seychelles is not the only destination experiencing a reduction in tourism arrival from France, other neighbouring islands like Mauritius and Reunion as well as the Maldives are being affected as well. Coupled with the fact that a lot of French tourists are not choosing long haul destinations we also have a lot of competition from destinations targeting the French market like Zanzibar that is offering novelty and good rates as well as Hanoi,” Naiken told SNA.

The absence of direct flights is another factor impacting on arrivals from Italy and France when compared to Germany which is the only European market whereby the number of visitors has been maintained to date thanks to direct flights provided by Condor.

On the other hand, 2014 has seen quite a boom in arrival from the Asian market compared to previous years as a result of marketing efforts by the tourism authorities in a bid to diversify the island’s tourism markets to minimize the impact when one particular market suffers.

China for example is currently amongst the top 6 leading markets according to figures released by the NBS with 6,361 tourists having disembarked at the island’s International airport since January, and Naiken is confident of China remaining in the top 6 at the end of the year which will be a first for Seychelles.

“We are happy that we have developed our Asian markets because these are consolidating our arrivals……Forward booking is already positive and looking good for the rest of the year …..As the Asians tend to go for last minute booking we expect that there’s more to come,”

The STB envisions the Asian market becoming more prominent for the island nation but remains confident that the European market will continue to maintain its position as the traditional and leading market for Seychelles.

STB’s Chief Executive says the launching of Air Seychelles flight to Paris in July will help put the French market back on track.

“Our tourism office is already working closely with the tourism operators in France……the launching of flights to France will help to have the French market back on track to consolidate our position for the remaining half of the year,” says Naiken.

“At the same time we have already discussed as the tourism board to next year have a budget to re-invest in the French market by launching a campaign that will put us at par with other destinations competing for a share of the market…we are doing much already….. we are visible….but we need to repackage our products.”

Nevertheless, for the remaining six months STB is expecting the tourism figure from Europe to pick up during the European holiday break between August/September.

Commenting on the end of year tourism figure Naiken says “Its more challenging this year than the previous year…..challenges including air capacity ……...nevertheless we believe we can achieve same figure as last year …….. it’s still a bit early to have a good projection but will be in a better position to do so after the peak season has ended.

Tourism is the first pillar of the Seychelles economy.

Visitor arrivals leading market as at May 25