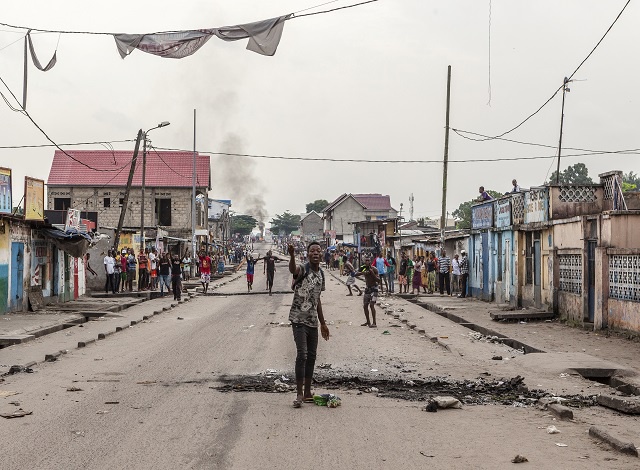 FILES) This file photo taken on December 20, 2016 shows a man screaming as people gather to protest in the neighbourhood of Yolo in Kinshasa. The government and opposition in DR Congo agreed late on December 22, 2016 on a draft deal to end a crisis sparked by President Joseph Kabila's decision to remain in office past the end of his mandate. A team of legal experts from the two sides is studying the document, under the aegis of the Congo National Episcopal Conference. It was set to be adopted at a plenary session on December 23, 2016 in the morning, to be followed by an official signing later in the day. However, sources say "complications" are holding up a final agreement.(Eduardo Soteras / AFP)

(AFP) - Attacks in villages and fighting between militias killed at least 35 people over the Christmas weekend in North Kivu, a majority Christian area in eastern Democratic Republic of Congo.

The bloodshed began in Eringeti -- a town 55 kilometres (35 miles) north of the regional hub Beni, which for two years has been hit by massacres killing hundreds, many of whom were hacked to death.

The toll climbed to 35 on Monday with the announcement that at least 13 Hutu civilians, mostly women and an eight-year-old girl, were killed on Sunday by a militia from the Nande ethnic group.

"The victims were all Hutu. There was an eight-year-old girl, a father and the rest were women," said local official Alphonse Mahano.

They were killed around the village of Nyanzale, a Hutu majority community.

The Nande and some other ethnic groups regard the Hutus as outsiders because of their attachment to the majority ethnic group in neighbouring Rwanda.

A string of attacks in the past year by both Hutu and Nande militia forces has deepened hatred between the communities.

Hutu farmers have also been forced to abandon land further south because of high property costs and under pressure from major landowners.

Although Congolese officials have blamed the attacks on the ADF, several expert reports have suggested that other groups, including elements within the Congolese army, took part in some killings.

When the Beni massacres began in October 2014, the ADF was quickly branded the culprit by both DR Congo authorities and MONUSCO, the UN mission in DR Congo.

More than two years on, Congolese authorities and the UN have been unable to protect civilians and the ADF remains the only official explanation -- with the government insisting on a jihadist link to the killings.

It comes as relations with the international community have soured over President Joseph Kabila's refusal to step down despite his term ending on December 20.

Separately, the Armed Forces of the DRC (FARDC) announced Monday that its troops had killed 10 soldiers from neighbouring Burundi after they crossed the border last week in pursuit of rebels.

"There were 10 deaths," Major Dieudonne Kajibwami, told AFP, following a previous statement that five bodies had been taken to Uvira, a lakeside town in the eastern South Kivu province.

Kivu is rich in natural, mainly mineral resources, such as gold, coltan and cassiterite, coveted by the telecommunications industry. Both south and north Kivu have rich agricultural and forestry resources.

North Kivu is one of the DRC's most densely populated areas.

Tiny compared to the vast size of the country, the two provinces suffer not only because of fighting over their mineral resources but because of their proximity to an unstable border with Burundi, Rwanda and Uganda, along with Tanzania.

Africa » Be a reporter: Write and send your article » Subscribe for news alert
Tags: DRCongo, unrest