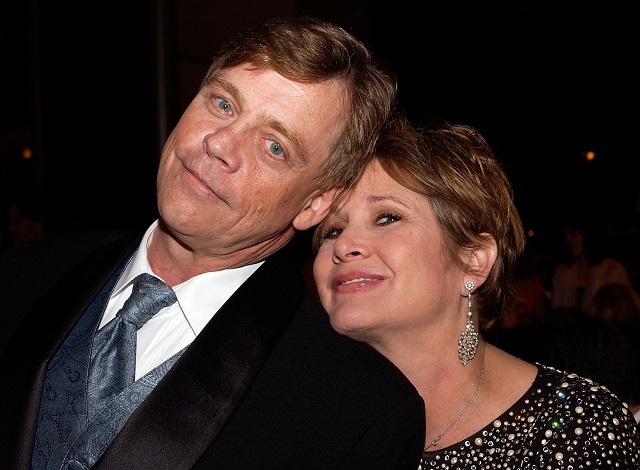 FILES) This file photo taken on June 9, 2005 shows actors Mark Hamill and Carrie Fisher posing at the dinner during the 33rd AFI Life Achievement Award tribute to George Lucas at the Kodak Theatre in Hollywood, California. Hollywood star Carrie Fisher -- best known for her portrayal of Princess Leia in the wildly popular "Star Wars" films -- died December 27, 2016, days after suffering a heart attack on a transatlantic flight. The 60-year-old actress had been in intensive care in a Los Angeles hospital after collapsing on the jetliner from London on Friday. "It is with a very deep sadness that Billie Lourd confirms that her beloved mother Carrie Fisher passed away at 8:55 this morning," family spokesman Simon Halls told AFP in a statement on behalf of Fisher's daughter. (Amanda Edwards / GETTY IMAGES NORTH AMERICA / AFP)

(AFP) - After decades of fast living that her fearless "Star Wars" character Princess Leia would have struggled to keep up with, Carrie Fisher died Tuesday following a massive heart attack. She was 60.

The American actress, best-selling author and screenwriter -- who suffered from numerous addictions she later turned into writing gold -- was a member of Hollywood royalty, both on screen and off.

Born in Los Angeles in October 1956, the daughter of actress Debbie Reynolds and singer Eddie Fisher became an international star overnight with the release of "Star Wars" in 1977.

Leia was the tough rebel princess in a white dress with a strange hairdo and blaster guns, who was unafraid to stare down the villainous Darth Vader.

Six years later in "Return of the Jedi," she became a sex symbol in a barely-there metal bikini -- but remained the tough heroine, killing her slug-like gangster jailer Jabba the Hutt by choking him with the chain he used to hold her captive.

The blockbuster space saga is now part of pop culture legend and a worldwide fan favorite. Fisher was back in the spotlight after reprising her iconic role in 2015's "Star Wars: The Force Awakens."

She was returning Friday from the London leg of a tour promoting her headline-grabbing memoir "The Princess Diarist" when she collapsed 15 minutes before landing in Los Angeles, where paramedics and hospital staff were unable to revive her.

"It is with a very deep sadness that Billie Lourd confirms that her beloved mother Carrie Fisher passed away at 8:55 this morning," family spokesman Simon Halls said in a statement to AFP on behalf of Fisher's daughter.

Tributes began pouring in soon after news of her death spread on social media, led by "Star Wars" co-stars Mark Hamill -- Luke Skywalker in the saga -- who initially tweeted that he was "devastated" and had "no words."

"It's never easy to lose such a vital, irreplaceable member of the family, but this is downright heartbreaking," he said later. "Carrie was one-of-a-kind who belonged to us all -- whether she liked it or not."

The legendary filmmaker Steven Spielberg described her as "a force of nature, of loyalty and of friendship" while Walt Disney Company chief Bob Iger said she was "a true character who shared her talent and her truth with us all."

Steeped in Hollywood excess from an early age, she was the product of the four-year marriage between Reynolds, best known for her role in "Singin' In The Rain," and Fisher.

The relationship, and the happy home in Beverly Hills, came to an end when Fisher left Reynolds for her close friend, the actress Elizabeth Taylor.

The early 1980s were marked by problems with alcohol, drugs and depression for Fisher, who appeared in a number of critical flops, including "Under the Rainbow" (1981) and "Hollywood Vice Squad" (1986).

She was widely praised for her performance in the hit 1989 comedy "When Harry Met Sally," but began to turn her back on acting in favor of writing.

She became known for her searingly honest semi-autobiographical writing, including her best-selling debut "Postcards from the Edge," which she turned into a film of the same name in 1990 starring Meryl Streep and Shirley MacLaine.

She gave various interviews over the years about her diagnosis of bipolar disorder and addiction to prescription drugs and cocaine, which she admitted using on the set of "The Empire Strikes Back" (1980).

Asked by Vanity Fair in 2006 how she persuaded "Star Wars" director George Lucas to give her the part of Princess Leia, she said: "I slept with some nerd. I hope it was George."

She "took too many drugs to remember" who it was, she added.

She also discussed being treated with electroconvulsive therapy, in which small electric currents are passed through the brain, to trigger brief seizures and treat depression.

In her first agony aunt column for the British Guardian newspaper in June, the actress promised to "provide solicited advice, based on a life filled with pratfalls and accidents."

Fisher told her readers that the addictions, heartbreak and mental illness she had endured amounted to a "fair share of challenging and unhappy experiences."

"Over time, I've paid attention, taken notes and forgotten easily half of everything I've gone through. But I'll rifle through the half I recall and lay it at your feet."

Her recently-released memoir "The Princess Diarist" is based on journals she kept while filming the "Star Wars" trilogy.

The memoir made headlines because of a section in which Fisher admits a three-month affair with co-star Harrison Ford while filming "Star Wars: Episode IV -- A New Hope" in 1976.

"Carrie was one-of-a-kind -- brilliant, original. Funny and emotionally fearless. She lived her life bravely... We will all miss her," Ford told AFP in a statement.

Fisher was briefly married to singer/songwriter Paul Simon in the 1980s. Her daughter Billie, also an actress, comes from her relationship with talent agent Bryan Lourd.

The eighth episode of the main "Star Wars" series -- due for release in December next year -- wrapped filming in July, according to Variety magazine, and will probably be her last big-screen appearance.

She was due to appear in 2017 fantasy adventure "Wonderwell," according to the Internet Movie Database, although the status of the shoot was not immediately clear and it has no publicly announced release date.

General » Be a reporter: Write and send your article » Subscribe for news alert
Tags: Entertainment, Fisher