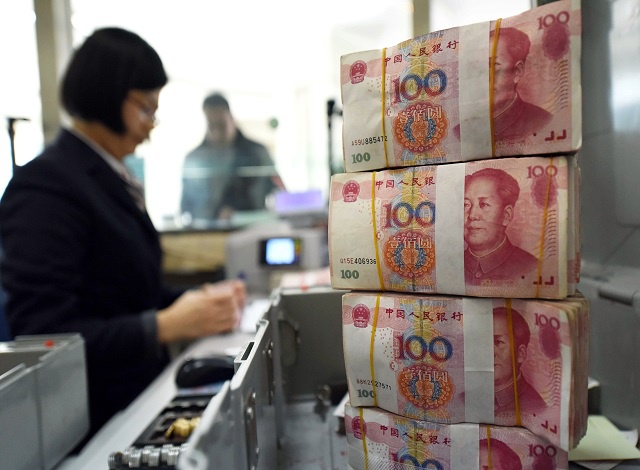 An employee counts 100-yuan (15 USD) banknotes at a bank in Lianyungang, in eastern China's Jiangsu province on January 7, 2016. China weakened the value of its yuan currency by 0.51 percent to 6.5646 against the US dollar on January 7, figures from the China Foreign Exchange Trade System showed. (CHINA OUT AFP PHOTO STR / AFP)

(AFP) - China said Thursday it would almost double the number of foreign currencies it uses to determine the official value of the yuan, thereby diluting the role of the dollar.

The move to expand the foreign exchange basket used to set a daily reference rate for the yuan, or renminbi, will help Beijing shake off the weakness of the currency against the greenback and project an image of stability in the unit.

The dollar will see its prominence in the basket dented by the newcomers, with its share falling from 26.4 percent to 22.4 percent. It is followed by the euro at 16.34 percent.

Among the 11 currencies to join the 13 existing ones are the South Korean won, the South African rand, the Hungarian forint, the Turkish lira and the Polish zloty, according to the Chinese Foreign Exchange Trade System, which is run by the central bank.

The expansion is designed to "strengthen the representativeness" of the basket and will come into force on January 1, it added.

"The move is aim (ed) to reduce the impact of dollar strength on the overall performance of the basket," said Christy Tan, head of markets strategy in Hong Kong at National Australia Bank Ltd.

China's currency has been under pressure from uncertainty over the health of the world's second largest economy, massive capital outflows and the sharp rise in the dollar following Donald Trump's election victory and anticipation of US interest rate hikes.

However, when valued against the "basket of currencies" as a whole, the yuan fares much better, even seeing a rise over the past four months.

China's communist regime likely hopes the move will project an image of stability and strengthen the international stature of the renminbi after it was welcomed by the International Monetary Fund into its elite currency basket in October.