A critical task on an island nation, Seychelles gets new tourism minister 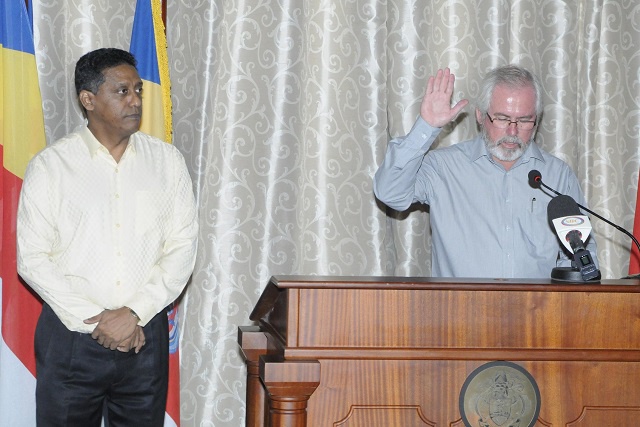 Maurice Loustau-Lalanne was sworn into office in a ceremony at State House in the Capital, Victoria. (Louis Toussaint, Seychelles News Agency)

(Seychelles News Agency) - Ambassador Maurice Loustau-Lalanne was sworn in on Friday in a ceremony at State House, as the new Minister for Tourism, Civil Aviation, Ports and Marine for the tourist-dependent island nation of Seychelles.

Loustau-Lalanne until recently occupied the post of Secretary of State with specific responsibilities for health.

He replaces Alain St. Ange, who announced his resignation on Wednesday, citing his intention to apply for the post of Secretary General of the World Tourism Organisation.

Loustau-Lalanne said he was very enthusiastic about taking on the new responsibility, although he did not aspire to be minister.

“Many people have said this appointment is a result of my accomplishments during my 40-year career and I will agree with them as I think it is a good way to complete my career in the public service,” said Loustau-Lalanne.

The new tourism minister said he has a number of issues that he will be addressing promptly to ensure Seychelles continues to prosper.

These include finding ways to ensure that visitors spend more when they visit Seychelles, a group of 115 islands in the western Indian Ocean.

“We have almost reached 300,000 visitors this year and the next step is to come up with a new system to entice them to spend while they’re here, and this is something that can be done,” Loustau-Lalanne said.

In the latest figures released by the Seychelles' National Bureau of Statistics (NBS) around 295,000 visitors arrived in Seychelles from January to December 25, an increase of 10 percent compared to the same period in 2015.

With regard to increasing the number of tourism arrivals, Loustau-Lalanne said this will have to be looked at carefully and discussed with all local and international partners.

“There is presently a moratorium on the construction of big hotels and this in itself begs the question as to whether our carrying capacity is saturated,” Loustau-Lalanne said.

He added that his other priority in the ports and marine departments is to relook at the Seychelles’ commercial port, which is not functioning to its full potential.

“We are very behind in this area and today we have a small port which cannot cater for the volume of business we receive. We need a bigger port and this should be done promptly,” said Loustau-Lalanne.

For the aviation sector, the new minister said his focus will be to ensure it remains safe, secure and reliable.

Loustau-Lalanne, 61, started his career in the public service as an air traffic controller. In 1981, he became the director general of the Seychelles Civil Aviation Authority (SCAA) for five years.

Loustau-Lanne was part of the Air Seychelles team that prepared the airline for the introduction of international routes in 1982.

He has served as Principal Secretary in four other ministries namely environment, tourism and transport, foreign affairs and health.

His post as Minister of Tourism takes effect immediately.

Air Seychelles being examined for restructuring or shutdown, official says