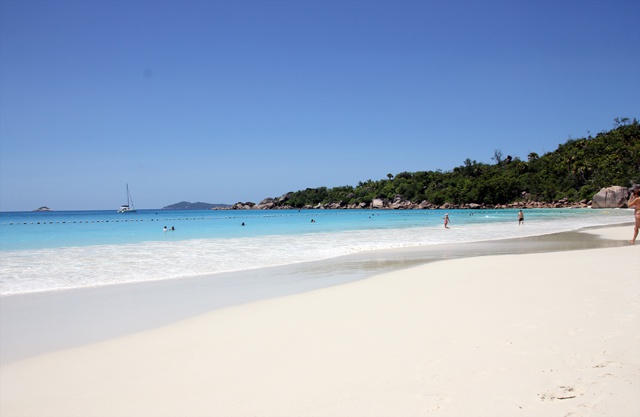 The safety nets were one of the measures enforced by the Seychelles Maritime Safety Administration (SMSA) to prevent shark attacks from re-occurring. (Romano Laurence, Seychelles News Agency)

The 150-meter-long nets were installed four years ago following two shark attacks in 2011 at Anse Lazio that cost the lives of a French and a British tourist.

The nets were one of the measures enforced by the Seychelles Maritime Safety Administration (SMSA) to prevent such attacks from re-occurring. The nets with large buoys were installed in front of the Bonbon Plume restaurant, one of two restaurants found on the half-kilometre-long beach.

Speaking to SNA, the director general of the SMSA, Joachim Valmont said, ”The nets were not serving their purposes anymore. Tourists still swam outside of the nets even if they were cautioned.”

Valmont added that the nets were frequently damaged during the northwest monsoon when huge waves lapped at the sandy beach of Anse Lazio, which is located on the northwestern side of Praslin.

However, Valmont says the administration is looking for alternative methods to prevent sharks from entering the bay.

Given the huge expanses of coastline and beaches found on the 115-island western Indian Ocean archipelago of Seychelles, one would think shark scares would be common. But they are rare. The fatal shark attacks in Seychelles happened in 2011 were the first in decades.

With its distinctive red granite boulders, Anse Lazio Beach was recently ranked as the 6th best beach in the world by the user-reviewed Trip Advisor website, following similar recognition from travel website Lonely Planet and numerous other travel websites and magazines.

After the 2011 incidents, the Seychelles Maritime Safety Administration has taken other precautionary measures which include a permanent presence of lifeguards on the beach and installation of drum lines off the shores of Anse Lazio.

“The drum lines acts as a safety net for large fish. They are attracted to the bait and are caught even before they enter the bay,” said Valmont.