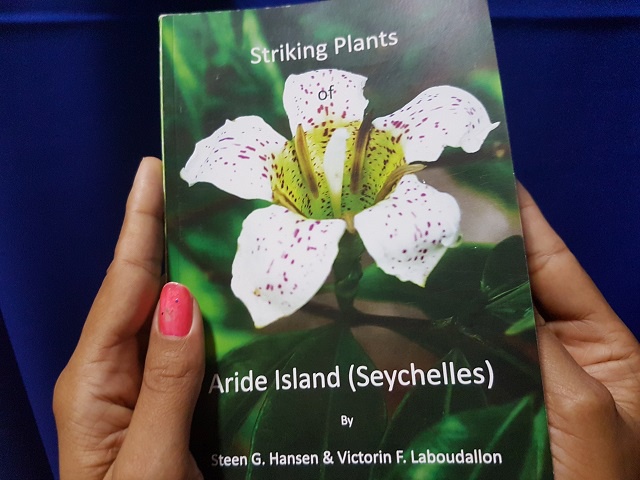 (Seychelles News Agency) - Aride Island has become the first island of Seychelles to have its own book on plants as part of a series being published by two retired conservationists.

The book entitled ‘Striking Plants of Aride Island (Seychelles)' includes over 20 indigenous plants as well as endemic and introduced species found on the island. It is written by Seychellois  Victorin Laboudallon and Steen Hansen from Denmark.

“Whatever plant is found on Aride will be in this book. From the rare 'Bwa sitron' or Wrights Gardenia, which was first discovered there, to the 'Kalbas maron' (Peponium vogelii)  to the creepers, shrubs, trees, lilies,” Laboudallon told SNA.

Aride -- a nature reserve since 1979 -- is the northernmost granitic island of Seychelles, an archipelago in the western Indian Ocean.  The island is not only home to the fragrant ‘Wrights Gardenia’ seen nowhere else in the world but also considered one of the finest tropical nature reserves in the world.

The two authors, Laboudallon and Steen, said the book of 103 pages includes general information about the island which is managed by the local Island Conservation Society and can also be used as reference for schools.

It is the first of a series that Laboudallon and Steen are hoping to soon publish dedicated to other islands of the archipelago as well as private properties.

“We wanted a more precise work this time round which will highlight the plants found in a specific location in Seychelles or on an island so that anyone can now become an expert on plant identification,” says Steen, a retired lecturer in biology.

With photographs and texts on each species, the book is being sold mainly by the authors at 195 SCR ($14.50) on the homepage of their site: www.floraofseychelles.com

A well known local naturalist, Laboudallon is also the founder of the Terrestrial Restoration Action Society of Seychelles (TRASS), a not-for-profit organisation based on the second most populated island Praslin,

This is the third project that Laboudallon has co-authored with Steen. In 2014, they published the Flora of the Seychelles: A Field Guide to Selected Plants and a second edition came out recently.